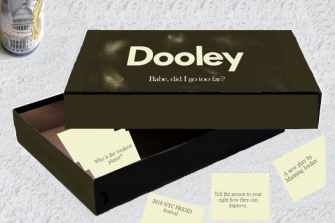 BOTTOM LINE: A psychological dark comedy about the secrets friends keep from each other.

Your friends are all together, the booze is flowing, and pizza is on the way. Nothing to do now but let the good times roll—that is, unless you find yourself the proud owner of Dooley, the game for people who like each other but wish they didn't. The titular play, written by Manning Jordan, explores the relationships of four young adults in the 1970s as they dive into the gritty details of their lives and the not-so-stable foundations of their friendships over a game of cards.

At the beginning of the night, the foursome quickly agrees to throw away the rule book and just go around the circle completing tasks from the deck. A few of these exercises are cute and harmless, but the game quickly devolves into hurtful confessions and pointed criticisms along the lines of "Tell everyone in the room something you dislike about them." The awkwardness becomes palpable, and pretty much continues in that fashion for the rest of the show. However, it's honestly hard to measure how much of this uneasiness is intentional, and how much comes from the discomfort of the actors.

It comes out in the text that the characters have all known each other for years, but the chemistry on stage suggests the opposite. Between missed cue lines and the constant interruption of the group forgetting whose turn it was, I spent much of the performance trying to gauge what I was supposed to be looking at—were the moments that I perceived as mistakes actually deliberate? The only reprieve from the confusion is a brief cameo by the playwright as the pizza delivery girl, far and away the most comfortable person on the stage at any point.

As anyone who has played them knows, if a board game isn't fun, you can stop playing. So it is difficult to watch the players continually express what a miserable time they are having, and then keep playing anyways. Perhaps this is the point, but still, the whole affair soon becomes nonsensical. Dooley might benefit from some efforts to make the play clearer and cleaner.

Dooley is by Manning Jordan. Directed by Alice Cash.