By Amy Heckerling; Directed by Kristin Hanggi
Produced by The New Group 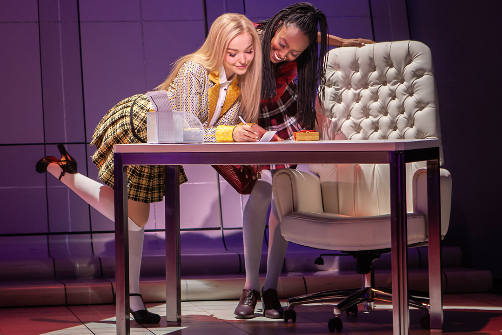 Dove Cameron and Zurin Villanueva in Clueless, the Musical. Photo by Monique Carboni.

BOTTOM LINE: Clueless gets a musical makeover in this daffy but doggedly entertaining stage adaptation.

Did we really need Clueless, the Musical right now? Even if the 1995 box office smash was the filmic fairy godmother to other teen classics like Mean Girls and Legally Blonde, those spiritual offspring broke onto Broadway first. What can Clueless add by playing catch-up? Not to mention that just last week saw the opening of The Cher Show—Clueless’ heroine Cher Horowitz, based on Jane Austen’s Emma, is named after the singer: how many Cher shows can we have at once? And speaking of trends, Clueless isn’t just yet another musical derived from Hollywood; it’s also yet another jukebox musical, repurposing 90s tunes with new, plot-relevant lyrics.

So will the rest of this review be an extended complaint about what Clueless says about the state of musical theatre and the commercialization of the art form? In the spirit of the original film, I can answer that in two words: As if.

Because, no, we don’t really need Clueless, the Musical right now, but, against all odds, it’s here anyway and it’s actually a lot of fun.

Cher (Disney Channel star Dove Cameron) is a Beverly Hills belle, a fashion-focused teen who thinks she knows everything about life and love, but is actually, well, check the title. Her attempts to get a new look and a new man for new girl Tai (Ephie Aardema) go horribly awry; so does her own pursuit of the dapper Christian (Justin Mortelliti). Cher’s quest to get a clue might have to include finally listening to the constant criticism from her exasperated ex-step-brother Josh (Dave Thomas Brown) and maybe even listening to her heart where her feelings for Josh are concerned.

Amy Heckerling, the film’s creator and director (she also spearheaded Fast Times at Ridgemont High), has shepherded this iteration, for which she’s penned the book and those updated lyrics, to the Off Broadway stage. Since Clueless, Heckerling’s made a few unsuccessful films and directed a handful of television episodes, but this is the biggest splash she’s made in the last 23 years. When one of her characters announces, “I’m through with working in TV. I’m thinking of joining the drama club. The best people are in theatre,” it’s hard not to think that’s Heckerling talking, planting roots.

Sure, much of Clueless, the Musical is Clueless, the Movie onstage, but if you watch the film right before seeing the show (as I did), you’ll notice that Heckerling hasn’t been afraid to replace and refresh much of the dialogue, even if the basic structure, the most iconic lines, and the occasional extended verbatim scene remain intact. And Heckerling’s lyrics, which ought to feel tacky, superimposed as they are over meh pop melodies like Tal Bachman’s “She’s So High” and Natalie Imbruglia’s “Torn,” tend to work as silly satire, especially when the songs send up 90s music itself: an early highlight is the transfiguration of Michael Bolton’s melodramatic “How Am I Supposed to Live Without You?” into an ultra-emotional duet (and then dream ballet) for two of Cher's teachers after she's cunningly played matchmaker.

What allows this jukebox show to be surprisingly effective is that these songs already make up the soundtrack of the characters’ pre-millennium lives—remember Coolio’s “Rollin’ with My Homies” from the film? The kids already listen to Radiohead on the car radio and sing NSYNC in the shower, so Clueless’ musical recycling makes sense: the kids are expressing themselves in their own haphazard language through the music they understand best. There’s a weirdly refreshing and unpretentious pleasure in hearing the tagline of Des’ree’s “You Gotta Be” changed from “Love will save the day” to “Love will save our grades” while the chorus of NSYNC’s “Bye Bye Bye” briefly mutates into its homophone as the high schoolers ponder Christian’s sexuality: “Is he bi bi bi?”

Cameron uses her strong pop voice to create an appealing Cher, with just a little more edge than Alicia Silverstone’s original incarnation. Brown, singing splendidly, makes Josh a terrifically wry and warm foil, especially when he’s calling Cher out for her vanity, even if his extended moments of soliloquy feel like an unnecessary detour from Cher’s kooky narration. Uncannily channeling Stacey Dash’s film performance, Zurin Villanueva is delightful as Cher’s best friend Dionne. So is Gilbert L. Bailey III as Di’s boyfriend Murray, but the show doesn’t go far enough in building on the film’s so-so diverse representation with only this semi-stereotyped black couple as supporting players.

There’s also a blissfully zoned-out performance by Will Connolly as stoner-skateboarder Travis. And Chris Hoch and Megan Sikora seem to be enjoying themselves in rotating grown-up roles. There’s genuine tenderness when Hoch’s Mel tells his daughter Cher, who’s just weaseled her way to straight As, that he couldn’t be prouder of her if she’d actually earned those grades.

The attempt to fit Clueless into a two-act musical structure reveals how episodic the story really is: each little vignette—Cher Gets Her Grades Up, Cher Finds A Boy for Tai, Cher Fails Her Driving Test—has its own song and scene with recurring characters, but there’s not a strong dramatic thrust (the placement of the intermission feels especially arbitrary). That’s partly because Heckerling defanged Austen’s unthinking Emma Woodhouse in the film, and Cher’s ditziness never crosses over into levels of cruelty that would require a story-shaping arc of self-reflection and self-improvement. For instance, the show could spend a little more time on explaining Cher’s burgeoning last-minute interest in climate awareness.

Still, the movie Clueless was mainly interested in Austen as social satirist, and this new musical gets the satire exactly right. The movie expertly—and just a little bit lovingly—lampooned 90s teens’ ignorance, clothes, wealth, and disengagement. The musical pulls 90s teens’ music under that wide net, too, and it’s just enough new bite to make the enterprise worthwhile.