Book, Music, and Lyrics by Gary Apple; Directed and Choreographed by Bill Castellino 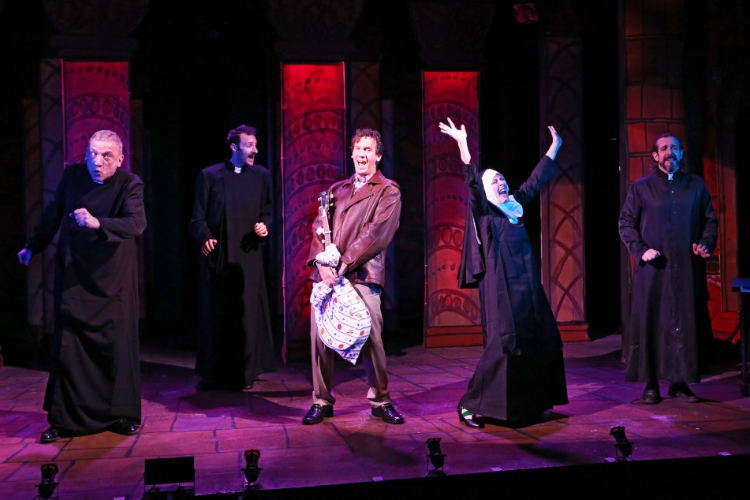 BOTTOM LINE: A lightweight musical that’s more than a little naughty—about family, fruitcake, Charles Manson, and a deal with the devil.

Perfectly timed for the holiday season and those who like their eggnog extra spiked, playwright and comedy writer Garry Apple (The Simpsons) delivers an ode to an off kilter Christmas that gets wicked before it goes right. But really, with the dreaded and reviled dessert in the mix, how can things not go terribly wrong?

The opening number “Fruitcake Canticle” chronicles the long history of a fruitcake that wends its way from 1964 to the present, where Richard (Scott Ahearn), a sweet-natured single father, is called to school for an incident involving his Chuck E. Cheese-loving son Davin (Elijah Rayman). The staff report that Davin has been up to no good, writing porn versions of Dick and Jane and bringing a crucified but still living frog to show and tell. They’ve even called in a no-nonsense detective (Dathan B. Williams) and a clueless officer (Zak Risinger). As Richard seeks help from Detective Zanderhoff, we learn, via re-enactments, what happened to Davin.

On Christmas Eve, he ate some of that tainted fruitcake and was in the ICU for weeks, alongside Charles Manson. When Davin woke up he was not the same boy—he’d come back possessed by Satan, whose minions mistakenly took him instead of Manson. What’s a father to do when his towheaded offspring ends up in Satan’s clutches? To save his son, Richard must secure a clandestine encounter with the Dark Priest (Ron Wisniski), drink a magic elixir (preserved in a Clamato bottle so that no one else will drink it by mistake because, well, clams) that transports him to Hell, and do a pas de deux with Lucifer (Brandon Williams).

Despite Apple’s comedy writing background, there really aren’t enough laughs and the re-enactments are confusing. In the first half I most enjoyed Father McDuffy (Wisniski again), the hospital's priest, who tells Richard to “throw him a bone” when he’s reluctant to join McDuffy in prayer. Afterward, McDuffy asks him to sign a form that “acknowledges that we prayed together. The Parish gets reimbursed by Obamacare. At least for the time being…'Like' us on Facebook and receive a free votive candle.”

Apple has crafted a number of winning tunes, backed by musicians Tomoko Akaboshi (violin), Darren Lucas (guitar), Mark Papazian (drums), and Logan Medland (conductor and keyboard). Two ensemble numbers are winners: “They Have To Let You In” and “Every Day Is Christmas In Hell.” But other songs, like “My Favourite Place,” a tribute to Chuck E. Cheese, fall flat. I’m not sure what’s behind Apple’s strange obsession with the pizza chain (Lucifer also promises to build Davin one in Hell).

Without a doubt, the cast clearly has a good time with the songs and Bill Castellino’s spirited choreography; their enthusiasm goes a long way towards making up for the lackluster lyrics and thin story. Lori Hammel’s Galiana, sorceress and keeper of the key to the Gates of Hell, is just the right amount of over the top as she sings “There’s Nothing More Than I Can Say” and yet she does, repeatedly. Like many in the company, Donna English portrays multiple characters, impressively inhabiting roles as disparate as the deeply offended school teacher Mrs. Huvey and later, a cleavage-baring God herself in “You’re God.”

The stand-outs are Zak Risinger and Brandon Williams. As Officer Epstein and Carl, the devil’s helper, Risinger has great comedic timing; I looked forward to each of his appearances. And there would be no show without the charismatic Williams, who adds some pizzazz to the second half in his role as Lucifer. Decked out in a sparkly codpiece, leather pants, and a sweater emblazoned with devils (my top pick among Tyler M. Holland’s witty costumes), he’s clearly relishing the bad boy part.

Christmas in Hell isn’t the most subtle or sophisticated of shows, but what holiday isn’t made better by giving the sacred an unholy kick in the ass? Easter, you’re next!