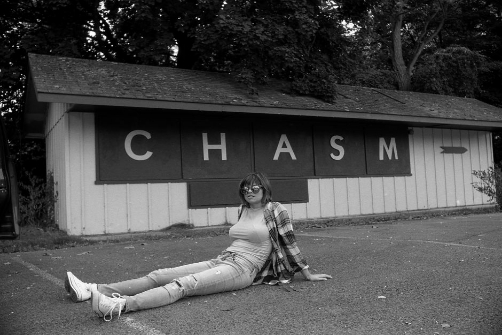 Rebecca Patek in a publicity shot for Chasm.

BOTTOM LINE: A sincere examination of an artist's path to recover from, and triumph over, trauma.

After a brief film (by L.A. Dierker) introduces her past, Chasm begins with solo performer Rebecca Patek giving a PowerPoint presentation. Our host of the evening, wearing a lab coat, asks how many in the audience identify as an artist. Most people in the room raise their hands. “Chances are at some point in your life, you’ll be called a prostitute.” Patek recounts being rated by the Erotic Review, calling it “the hooker yelp,” and explains how she has now given up the life of an artist, preferring to become a doctor instead. We then spend the rest of the show tracing back the steps that pulled Patek away from performance art, and eventually brought her back.

With bullet points, obligatory visual aids, and a laser pointer, this is exactly what you’d expect in a PowerPoint. Patek’s dry sense of humor, along with Meghan Finn’s direction, fully embraces the stereotypically boring structure, and as a result, the deliberately awkward presentation is intensely funny, especially given that it's a familiar device that everyone often associates with “boring.” There is no stylized staging, but the simplicity of the production accentuates its sincerity. Titled “5 Steps to Silence Shame,” Patek's report covers her personal battle with living post trauma, and fending off shame as a result.  Step 1 is perhaps the most important: “bring shame into the light.” If we run away from our stories, Patek explains, “we become the subject of the story. But if we own the story, we get to narrate the ending.”

Gradually, as if peeling an onion, Patek’s past comes into the light—her experience as a rape victim, turning that experience into performance art, experiencing the evolution of said piece, and then the additional shame that came with speaking out about her shame of being raped. Some of the most powerful, disturbing moments occur when Patek shows us some of the questions she was asked after her rape: “Were you wearing a skirt?” “Was it a real rape?” The utter silence, coupled with Patek’s perfect nonchalance, is deafening.

However, Chasm isn’t just about living with, and triumphing over, the shame of being a rape victim. Patek’s personal crusade was first censored because of its graphic and erotic contents, and then she was doubly violated when the whole thing spiraled into a melodrama of artistic dispute, when Ann Liv Young disrupted Patek’s show during the American Realness Festival. JACK then put on a show titled Ann Liv Young in Jail as a “punishment” for Young’s transgression of disrupting another artist’s work. Patek reenacts this past through a game of twenty questions, where she calls on an audience member to read questions as she dons a wig, and then recalls the incident as “Sherry,” an alter ego of Young’s.

Written before the rise of the “MeToo” movement, Chasm is eerily relevant. Although an extreme case, her experience is relatable to anybody who has faced objection when attempting to come to terms with their own trauma. We often wonder why artists make art, or why we fixate on certain things. To me, what Patek has done, and is continuing to do, is a coping mechanism, a kind of self-therapy with which to deal with her trauma. And perhaps because of her newfound passion in medicine, Patek has an even more clinical lens through which to re-examine her past. Chasm is indeed an anatomy of her past, one that she can now view objectively, and articulate a way out of. And isn’t that exactly the purpose of performance art?

Chasm, although at times funny, is certainly not just for entertainment. It’s a complex case, one that is perhaps not easy to digest if you aren’t familiar with Patek’s career. Although the production does a good job explaining everything without slipping into obscurity, it’s still helpful to go through some of the background information for context. And just as Patek will no doubt continue her own journey, I believe that the life of Chasm will not end with this production.