A Christmas Carol in Harlem

Adaptation by Shawn René Graham; Directed by Steve H. Broadnax III
Produced by The Classical Theatre of Harlem and City College Center for the Arts 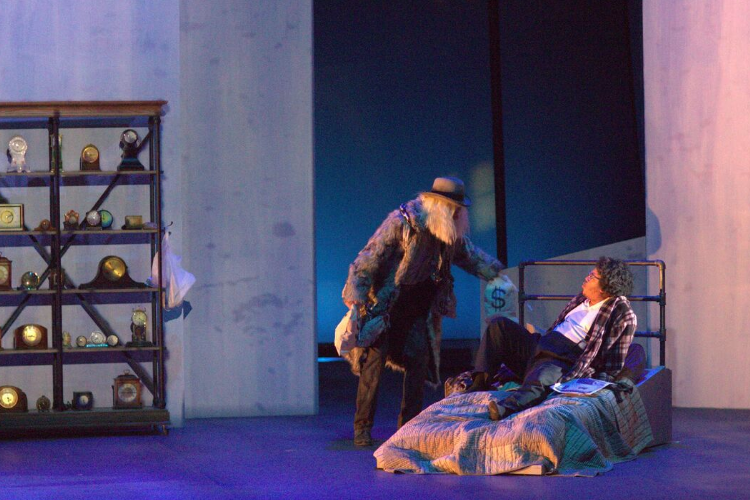 Steven Hauck and Anthony Vaughn Merchant in A Chrirstmas Carol in Harlem. Photo by Jill Jones.

BOTTOM LINE: A Christmas Carol in Harlem presents a joy-filled retelling of Dickens' classic tale, while imbuing Harlem pride into an understanding audience.

The Classical Theatre of Harlem’s take on this classic tale stays true to the original story, proving Dickens’ tale to be timeless. Scrooge (Anthony Vaughn Merchant) manages properties in Harlem, accompanied by his optimistic nephew Bob Cratchit (Jeffrey Rashad). As Christmas tidings naturally become the topic of conversation, Scrooge makes familiar arguments about wasting time and money. Emotions boil over when Sierra Jones (Alexandria Danielle King), a nose-to-the-grind social worker and community organizer, comes to propose the implementation of a community center. Although a black man born and raised in Harlem, Scrooge rolls his eyes at struggling families, and scoffs at neighbors who are systemically cut short from opportunity. He ignorantly takes the cringe-worthy perspective: one must work hard to succeed, poverty and hard-times are the result of laziness and complacency, and of course “everyone wants a free lunch.”

As carolers fill the stage and the hush of Christmas falls on the Harlem setting, Scrooge retires home with a chopped cheese in hand, muttering to himself about wasted money. The Ghost of Christmas Past (Brandon Gregory) soon appears, donning golden roller skates and sharing sweet childhood memories. In one particularly heartwarming moment, Scrooge sees his childhood friends Tommy and Benny (Kaden Jones, Reed Harris Butts) practicing their holiday talent show routine. Jones and Butts dazzle the house with their original 80s-style rap—getting the audience involved in their infectious joy as they rhymed about their wish lists.

As Christmas Present (Jason C. Brown) takes over, the narrative becomes infused with a rave of modern gay culture. Elite dancers in mesh tops guide and tongue-pop Scrooge through his present Christmas, telling him to go “Fa La La” himself. When a reaper-esque Christmas Future (Kahlil X Daniel) scares Scrooge into changing his ways, the piece became filled with Harlem-specific jokes about Christmas day. Scrooge buys a turkey at Foodtown, and makes a few renters’ dreams come true.

A Christmas Carol in Harlem is a cozy, spirit-filled way to spend an evening, especially as a resident of Harlem. Based on the conversations filling the theatre, most audience members seemed to be Harlem residents, excited to have a high-quality, well-curated production within walking distance. In a moment where so much theatre about Harlem and the Heights (Our Lady of 121st Street or In the Heights) remains inaccessible to the residents of those very neighborhoods, it is refreshing to be in a house of those who these stories are written about. At A Christmas Carol in Harlem, the audience chuckles and prods each other when specific Harlem restaurants, landmarks, and inside jokes are mentioned. Overall, it is refreshing to be in a theatrical space that really understands and serves their target audience.

Although the piece certainly is feel-good and jolly in all the right ways, I didn't truly appreciate its magic until afterwards. While leaving the venue, folks on the sidewalk asked “what just got out?” When we told them it was a modern re-telling of A Christmas Carol "set right here,” we immediately had complete strangers asking for ticket information and sharing their excitement over community-based, community-minded theatre. In this way, the Classical Theatre of Harlem’s mission and impact, along with Producing Artistic Director Ty Jones's reminder that “there is art happening above 96th Street,” are certainly proven. On the cusp of the centennial of the Harlem Renaissance, it is exciting to encounter a group of theatre-makers looking to celebrate that same explosion of art and culture.

(A Christmas Carol in Harlem played at Aaron Davis Hall, 115 Convent Ave, through December 8, 2018. The running time was 90 minutes with no intermission. Performances were Tuesdays at 8; Wednesdays at 1 and 8; Thursdays and Fridays at 8; Saturdays at 1 and 8; and Sundays at 1. Tickets were $45 with offered student and senior discounts, and were available by calling 646-838-3868 or by visiting cthnyc.org.)