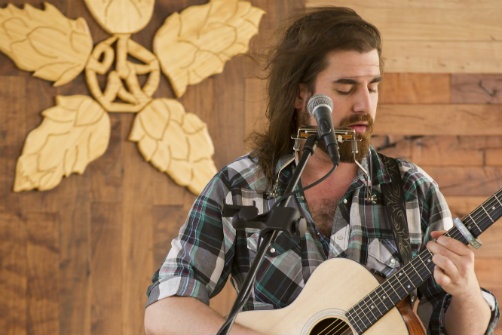 BOTTOM LINE: A touching look at love, relationships, and coming of age through the lens of songs and, of course, beer.

Ryan Adam Wells, an extremely talented musician, sets a friendly and casual scene for Beers About Songs from the very beginning. Alone against a black box and tuning his guitar, he makes conversation with the audience members, both strangers and friends alike. Wells does his best to create an enticing sense of community for the crowd, preparing them for the beer drinker's creed and a collective toast to kick off the show. From here, he launches into his hour-long autobiographical set mixing songs and prose to guide the audience through his journey to self love through the tumultuous relationships of his early twenties (especially his relationship with beer).

Wells' alternative country twang, combined with his heartfelt lyrics and story, as well as the amazing vulnerability he shows onstage, make for a captivating performance. He is also incredibly entertaining: at times hilarious, Wells can switch on a dime to feeling the real and intense pain that inspired him to create his music. Whether he's singing about the good times or the bad, the songs themselves are catchy and showcase his excellent guitar skills as well as his "rocker-with-a-twang" vocal stylings.

One of the most important aspects of Beers About Songs is Wells' attention to domestic abuse. He fearlessly sings and speaks about extremely difficult times in his life, both directly and indirectly calling our attention to the widespread and undiscriminating problem of domestic violence—something rarely spoken about by men. His tact and personal experience, as well as his flawless ability to relate personally to his audience, truly makes his story resonate. Beers About Songs is a story told simply, and it's a story that simply needs to be told.

Beers About Songs is written and performed by Ryan Adam Wells.