The Angel of Allegheny County

Off Off Broadway, Play
Runs Through 4.29.18
The Bridge Theater at Shetler Studios, 244 West 54th Street 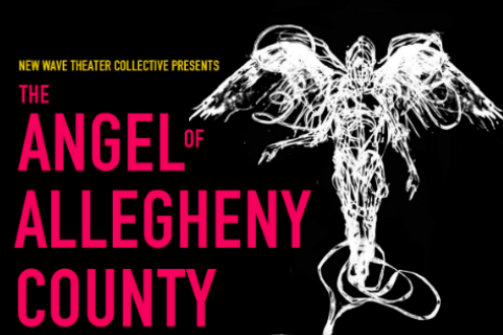 The Angel of Allegheny County. Art Design by Peter Stults.

How do we bring balance to an unjust world? This question has confounded societies for millennia as our laws, philosophies, and moral codes attempt to mediate human frailty and cosmic disorder. Alec Silberblatt’s new play The Angel of Allegheny County offers a darkly comic look at the subject, as interconnected circumstances lead four women to confront issues of mortality, responsibility, and the desire for vengeance.

Set in contemporary Pittsburgh (with careful ear for the region’s distinctive accent), The Angel of Allegheny County opens as the feisty, elderly Nancy (Jo Ann Sellers) confides in her neighbor Donna (Erika Rolfsrud) about her declining health and uncertain fate. Faced with the amputation of her tumorous leg and indignant over her daughter Gina (Barbara Weetman)’s advance purchase of a motorized scooter, Nancy’s snarky banter and half-joking suicide threats belie a deeper fear of future suffering and increased reliance on Gina’s care.

Donna, a nurse at the local hospital, attempts to pacify her friend with humor and medical insight, but her efforts are cut short by the arrival of Margo (Malka Wallick), Nancy’s delinquent teenage drinking buddy. Furious and grieving her friend Connie’s death at the hands of a drunk driver, Margo appeals to Donna’s access to the now-comatose woman, pressing Donna to avenge Connie by pulling the plug on her assailant. When Donna refuses, Margo cites her previous acts of retribution: ten years ago, Donna was believed to have murdered a convicted killer in her care; this rumor, though unconfirmed, has since made Donna an outsider in her community and a hero in Margo’s eyes. Despite Nancy’s admonitions and Donna’s insistence on her profession’s need for neutrality, Margo remains steadfast, viewing death as a just punishment for a woman who knew the implications of her choices.

Days later, Donna’s reputation resurfaces when a failed suicide attempt places Nancy in the same condition as Margo’s killer and Donna in an eerily similar place of responsibility. Hoping to ease her mother’s pain, Gina begs Donna to cut off Nancy’s life support, referencing the pair’s history and and even offering payment for the deed. Caught between desire, conviction, and guilt, Donna forms an uncanny connection with the troubled Margo as the two bond over bourbon and moral-philosophical dilemmas. However, when an act of betrayal ruptures this newfound friendship, Donna must come to terms with her past choices and determine the right course of action.

The cast’s truthful performances highlight The Angel of Allegheny County's moral complexities as well as its unsettling humor. Brimming with teenage fury and sociopathic charm, Wallick’s Margo makes a compelling case for the eye-for-an-eye dogma she spouts; though her world view is inherently self-serving, we can empathize with the pain and existential turmoil from which it stems. Likewise, Sellers balances stubbornness and vulnerability in Nancy’s refusal to succumb to illness, framing suicide as less a surrender than a last-ditch attempt at personal autonomy. Even Gina, conscious of her caregiver fatigue and outlandish requests, truly sees her machinations as acting in her mother’s best interest. As the play’s moral center, Rolfsrud’s Donna shares appealing chemistry with each woman as she finds herself the unlikely angel to which they direct their prayers. Compassion and practicality notwithstanding, she cannot fill this role: her ambiguities prevent her from becoming the source of justice, healing, or mercy others seek. The simple prop of an over-filled laundry basket forms an apt metaphor: despite her efforts, Donna can cleanse neither her own soiled exterior nor the stained offerings her neighbors pile before her.

The Angel of Allegheny County raises some finer points about our attempts to extract meaning and redemption from circumstances beyond our control. In the absence of inherent order, the ethical, legal, and spiritual codes we create give our lives structure and encourage us to align with our better natures. Yet personal notions of right and wrong, especially when colored by emotional extremes, can blind us to our shortcomings, leading us to cast faith in flawed sources or justify questionable behavior in the name of righteousness. In our efforts to rectify an unfair world, we must remember that we are not avenging angels—we are all too human.

(The Angel of Allegheny County plays at The Bridge Theater at Shetler Studios, 244 West 54th Street, through April 29, 2019. The running time is 80 minutes with no intermission. Performances are Tuesdays through Fridays at 7, Saturdays at 2 and 7, and Sundays at 2. Tickets are $27 and are available at newwavetheatercollective.com.)