All is Calm: The Christmas Truce
of 1914

Off Broadway, Musical
Runs through 12.30.18
The Sheen Center, 18 Bleecker Street 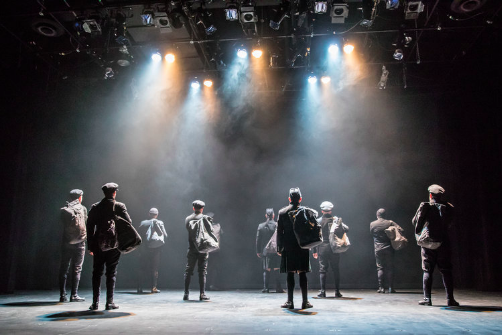 The cast of All is Calm: The Christmas Truce of 1914. Photo by Dan Norman.

BOTTOM LINE: Whether or not you're looking for a Christmas-themed show, make All is Calm: The Christmas Truce of 1914 part of your holiday season.

All Is Calm: The Christmas Truce of 1914 registers as a single breath, a gentle inhale and exhale that carve out a gorgeous little oasis within the pressures of history. We know that the soldiers who emerged from the trenches to revel ever so briefly with the enemy had years of battle ahead of them. There’s no suspense about how All is Calm ends—the Christmas Truce, which really did take place along the Western Front in the early months of World War I, was just that: a transitory respite from the gunfire and a fleeting glimpse at the shared humanity across enemy lines. But even if the story, told here through soldiers’ own words and the war songs and carols of the day, is shaped by the inevitability of what we know happened next, it’s the inevitability of war itself that All is Calm so gloriously and persuasively combats.

In the gently-structured All is Calm, ten a cappella vocalists portray British soldiers (and sometimes French and German soldiers too) as they enlist, discover the harsh realities of life in the trenches, and use music to broker a momentary peace. And what music it is, thanks to Erick Lichte and Timothy C. Takach's superb vocal arrangements and the ensemble that carries them off.

There’s a convincing sense of musical verisimilitude in the jaunty treatment of war tunes like “Pack Up Your Troubles” and “It’s A Long Way to Tipperary,” but All is Calm achieves the transcendent through the dissonant cluster chords of an utterly stunning “Silent Night” as the troops face each other in a powerful tableaux above ground. (Peter Rothstein, All is Calm’s creator and director, matches the always-thoughtful musical choices with a simple, graceful staging around Allen Weeks’ resourceful set built from soldiers’ luggage.) In that song—and in carefully selected other moments—we hear choral writing that’s more Eric Whitacre than early 20th-century music hall, but its contemporary sheen registers as timeless rather than anachronistic, impossible harmonies representing the impossible blend of British and German voices joined together.

The members of the expert vocal ensemble have a chance to distinguish themselves from the pack, tackling regional accent after regional accent, through a collection of soldiers’ quotes from letters and journals that come in between the songs. It’s at first distracting to hear the names and ranks of the speakers after each quote, but these recitations eventually fold into the rhythmic texture of the piece, the names refusing to allow the audience to forget how very real this story is.

As the soldiers return to battle following the truce, we hear their sudden gunfire as a kaleidoscope of all the songs they sang together, disquietingly interwoven. Even in humanity’s darkest moments, All is Calm pleads for us to see that the possibility of choosing song over destruction is only a breath away.