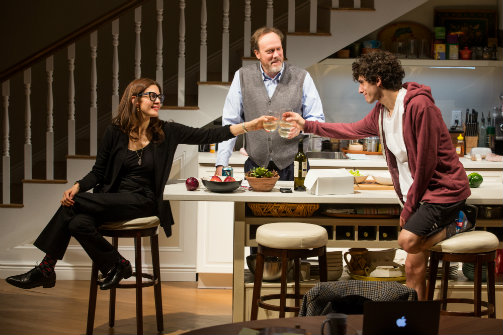 BOTTOM LINE: A play about well-meaning white people illustrates just how difficult it can be to make the world a better place.

In conversations about diversity, college admissions are often front and center. It’s an area where there is a lot of wiggle room, a lot of variables, and a lot at stake—a perfect locus for arguments about how best to achieve the kind of student body—and by extension, national body—we as a people want. And it is therefore a perfect setting for Joshua Harmon’s Admissions, one of the best, most profoundly human plays "about diversity" I’ve seen in a long time.

Sherri Rosen-Mason (Jessica Hecht) is the Head of Admissions at Hillcrest, a prep school in New Hampshire that is working hard to become more competitive. And also more diverse—together with her husband Bill (Andrew Garman), who is the Head of the School, Sherri has been working tirelessly to raise the percentage of students of color at Hillcrest (she’s hoping to reach 20% this year). Sherri and Bill’s son Charlie (Ben Edelman), a senior at Hillcrest, has applied early to Yale, his dream school. So did his best friend Perry, primarily because that’s where Charlie wanted to go. So when Perry, whose mother Ginnie (Sally Murphy) is white, and whose father is black, gets accepted early, but Charlie gets deferred, many underlying tensions start to surface.

In this play about diversity, to say that Harmon’s play "tackles both sides" would be a disservice to the piece. This is a play where all of the characters are on the same side (more or less). And this is what makes Admissions so compelling. There is no straw man here—no "Becky with the Bad Grades" (aka Abigail Fisher, the mediocre white student whose suit against the University of Texas reached the Supreme Court…twice). All of the characters sincerely want a world that is more equitable, and firmly believe that diversity is a key tool in achieving that goal. Even Roberta (Ann McDonough), who works in Development and struggles with finding the right mix of racial diversity in the photos for the Admissions Catalogue, is not just the out-of-touch older white lady more "woke" folks love to deride. Roberta’s honest struggle to understand just exactly what Sherri is looking for makes clear the conflicts that arise when we attempt to present an image that is at odds with how life really is. The outstanding McDonough somehow manages to make Roberta incredibly sympathetic, giving a sincere face to those who simply don’t understand why Moby Dick is no longer required reading.

And then there’s Charlie, whose emotional rant after finding out he’s been deferred, but Perry (who may well be less qualified in some key ways) got in, is a highlight of the play. Ben Edelman gives a bravura performance here, spewing forth anger that is as powerful as it is knowingly conflicted. What’s more, Charlie hits on many of the problems with liberal arguments for diversity, including what precisely we mean by "person of color," especially in a global sense, as well as the tendency for those in power to champion diversity as long as it means they don’t have to give anything up: "it's fucking easy to make room at a table you don't have to sit at. Well, news flash from the people trying to sit at those tables: you can't just keep pulling up chairs. There isn't unlimited room. That's like, not how tables work." It’s quintessential Harmon, the playwright of Bad Jews and Significant Other—meaning, a monologue where a character spews forth ideas that should seem hateful or at least troubling, but are perhaps more understandable than we might want to admit. And not just because the characters make some excellent points, or because they expose underlying hypocrisies, but because their "admissions" result from the familiar tension between the shameful emotions we often feel (but rarely give voice to) and the better kinds of people we want to be.

Certainly, one could argue that it’s problematic to have a play about diversity with a white playwright, white director, and all-white cast (and, given the demographics of LCT’s subscribers, staged for a mostly white audience). But this is exactly Harmon’s point. After all, he could easily have written a scene with Ginnie’s husband or son. And while at one point Ginnie refers to the kinds of conversations that happen in her home, Admissions is not that play. Rather, it’s a play about whiteness, and more specifically, liberal white America—what kinds of conversations do well-meaning white folk have about race? And what can white people—those who sincerely want to make the world a better, more diverse place—actively do, especially if they also want to make room for others at a table where there aren’t enough chairs?

(Admissions plays at the Mitzi E. Newhouse Theatre at Lincoln Center, 150 West 65th Street, through May 6, 2018. Running time is 1 hour 40 minutes, no intermission. Performances are Tuesdays at 8, Wednesdays at 2 and 8, Thursdays and Fridays at 8, Saturdays at 2 and 8, and Sundays at 3. Tickets are $92. Visit lct.org for tickets and more information.)