By Dan McCormick; Directed by Joseph Discher
Produced by The Directors Company in association with Shadowcatcher Entertainment 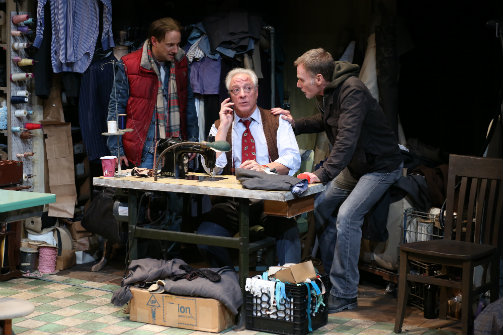 BOTTOM LINE: A provocative drama that centers on three down-on-their luck men who have a chance to reverse their fortunes.

Most of us have fantasized about winning the lottery, finding a slew of greenbacks in a brown paper sack, or inheriting millions from a long-lost, little-known relative. Ah, the things we’ll do, the places we’ll go. This daydream is as potent as it is pervasive (and unrealistic). But what if Chance were to smile upon us and leave us with a potential fortune? Would we seize the opportunity?

Brothers Bobby (Peter Bradbury) and Terry (Kevin Isola) Sullivan face this dilemma when a violin—later identified as a 1710 Stradivarius worth $4 million—is accidentally left in the back seat of the taxi Terry drives. Reward notices offering an unspecified sum for the violin’s return have been posted. As the pair discuss their options, it becomes clear that Bobby is used to calling the shots. He’s brash, arrogant, and can move between tender affection and cruel humiliation without taking a breath. Terry is developmentally challenged; no matter the abuse hurled at him by his older brother, Terry relies on Bobby to lead the way. With them is Gio (Robert LuPone), an elderly tailor who has been a friend to the boys since their parents were murdered many years back.

All of the action takes place in Gio's shop—set designer Harry Feiner has created a cluttered, somewhat seedy, storefront filled with shirts, pants, and jackets in need of repair that is perfectly calibrated to suggest deep community ties. As the men debate options to maximize the reward, Gio repeatedly advises Bobby and Terry to make thoughtful, well-reasoned choices. Indeed, as the debate over strategy intensifies, Gio explains why this is so important, sharing some startling tidbits about his own life and laying bare a raft of regrets. Gio’s explanation—delivered as a desperate plea—is riveting as he reveals the profound guilt, shame, and sadness he’s lived with for decades. It’s a cautionary tale writ large.

Still, Bobby and Terry want a quick fix, and as a plan emerges, their respect for Gio becomes tempered by greed. Will they, or won’t they, blackmail the violin's owner into paying an exorbitant ransom? Suffice it to say that the denouement is tension-filled and dramatic.

All three actors are excellent and the scenes play out with rapid-fire dialogue. It’s talky, but the constant banter is a necessary means to a strategic end and gives the audience great insight into the personalities of the diverse, troubled men on stage. Joseph Discher’s direction is excellent, ensuring that the dialogue avoids being heavy-handed or preachy and is, instead, engrossing and wise.

The cast is Peter Bradbury, Kevin Isola, and Robert LuPone.