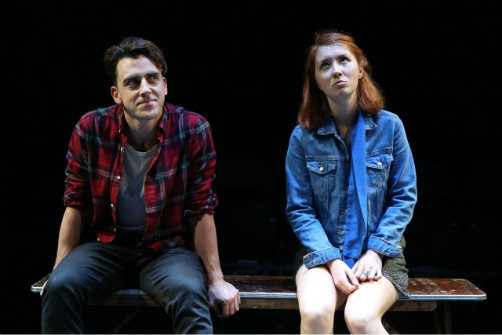 BOTTOM LINE: Despite its brevity, this play offers some compelling thoughts on what it means to seek love and life direction in a technology-dependent big city.

The short work Underground examines the lives of cell phone-fixated, twenty-something urban dwellers of London attempting to find connection in a world where one is rarely willing to interact with a stranger, looking instead down the rabbit hole of technology in the hope for intimacy. The characters often ask each other “When was the last time you didn’t feel lonely?”, wondering how in such a populous city they could still be so very alone, trapped in dead-end jobs and dodgy apartments, wondering why they thought living in such a big city was a good idea.

The play opens with James attempting to describe himself, wondering which character from The Breakfast Club he might be, showing nostalgia for an era he never really experienced. He flips through his Tinder application, explaining to the audience just how he goes about selecting a date (he swipes right for almost every female so that he’ll know they liked him back and he’ll get validation.) He gets matched with Claire (BeBe Sanders), who introduces herself by saying that she was raised with the expectation that she was going to achieve something in life instead of listlessly working to survive in the city (a compelling point that hits home, but one that the character never returns to). Through matching, they learn they cross paths multiple times daily; Claire wonders how she could have been near a person so many times but never noticed him.

Against her better judgement, Claire agrees to go on her first Tinder date with James. The two smoke and drink whiskey and wonder how they have made it to nearly 25 without having any sense of accomplishment or permanence. (Already this seems to be far better than most Tinder dates). The two head home on the Tube late at night, only to find themselves stranded underground (an experience surely familiar to any seasoned New Yorker). With their cellphones both dead, they have no sense of how much time has passed or when the train will be fixed, and in their predicament they connect more deeply than they would on a normal date. As the two slip in and out of sleep, the subway announcements become more and more philosophical, urging them to take some direction in life before it is too late.

Van Tricht has some compelling ideas here, but the themes and message are too underdeveloped for the audience to truly feel her vision. This play feels a bit like a first act of a two-act play, or like a play missing a final scene. What are we to take away from the train’s philosophical announcements? That the characters finally took enough of an interlude from their overly busy technology-fixated lives to see the big picture? Despite the play’s brevity, the three-person cast makes the most of the comedic and emotionally charged moments. The set also makes the most of the smallest of 59E59’s spaces, using long benches to evoke both a train car and a bar. The play even begins with an attention getting gimmick: each audience member must wear a color coded sticker signifying their dating status and an announcer advises you to lock eyes with someone single, emphasizing just how rarely nowadays we interact with the strangers around us.

The cast is Michael Jinks, Bebe Sanders, and Andrew McDonald.