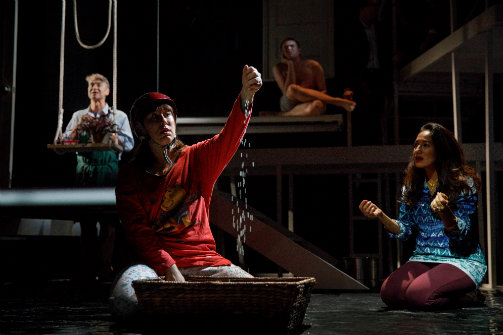 The cast of Uncommon Sense. Photo by Joan Marcus.

There is a scene in Uncommon Sense in which a character with Asperger syndrome watches his girlfriend sleep for the first time. To his horror, he discovers she snores. The noise is unbearable to him and a tuba plays loudly as projections display the chaos going on in his head. It's one of many moments in which sound, images, light, and actors work seamlessly together to illustrate what is going on in a character's brain. The Curious Incident of the Dog in the Night-Time did this on a much larger scale on Broadway, but Uncommon Sense focuses on four individuals on the autism spectrum, not just one.

The characters are composites, created from interviews conducted by playwrights Anushka Paris-Carter and Andy Paris, the latter of whom also directs. Moose (played by Andrew Duff, who is on the spectrum) is mostly nonverbal and runs away frequently. Then there is Jess (Jessica Almasy), a college student who prefers Japanese anime and video games to people. Dan (Scott Barrow) has Asperger's; his sister (Purva Bedi) is desperate for him to meet someone. Lali (Jill Frutkin), also nonverbal, loves playing with rice, and her mother (Bedi) hires a speech pathologist (Almasy) in the hope that she can learn to communicate with her daughter.

The upside of this structure is that it allows audiences to see a range of behaviors associated with autism and shows that no two people on the spectrum are the same. For the most part, we get enough of each story to become invested. The downside is that, because of the short run time that has to be split between the various plots, some cry out for more development. This is especially true of Moose's story: We see his parents (Michi Barall and Brian Hastert) trying so hard, but they are often arguing, and it would be nice to see more variation. Still, the cast makes the most of these scenes. Many of the actors play multiple roles and do such a good job of distinguishing them that sometimes I didn't realize when it was the same person.

The play is frequently funny, but not at the expense of the characters. And while it shows many victories, it also doesn't wrap everything up nicely or shy away from the problems that people on the spectrum face in romantic and other relationships. But the design elements take a pretty good script and bring it to another level. David Bengali's projections are particularly smart.

Not only does Uncommon Sense allow audiences to get a glimpse of what it's like to live with autism, it creates a safe space for everyone to experience theatre with a pair of Relaxed Performances. There is also a note in the program that reads, "This production will be presented in a judgment free and inclusive environment. At no point will anyone be shushed or asked to leave due to noises, movements, or behaviors related to a cognitive or developmental disability." And that should be applauded.

Uncommon Sense is by Anushka Paris-Carter and Andy Paris. Directed by Andy Paris. Set Design is by John Coyne. Lighting Design is by Paul Miller. Sound Designer/Composer is Stephanie Robinson.  Costume Design is by Jacob A. Climer. Projection Design is by David Bengali. Production Stage Manager is Bess Marie Glorioso.