Tell Hector I Miss Him 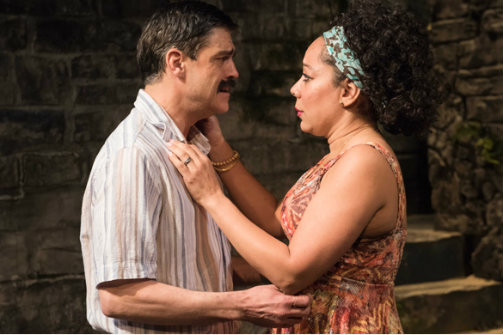 BOTTOM LINE: Tell Hector I Miss Him brilliantly delivers a raw and impassioned performance of life and longing in Puerto Rico.

From the very first line of the play, screamed in the dark with ecstasy and obscenities, answered with expletives and genuine concern, playwright Paola Lázaro and director David Mendizábal expertly set the tone for their explosive world premiere production with the Atlantic Theater Company.

Amidst a panoramic of HD waves and the rhythmic pull of salsa and reggaeton music, a tight-knit neighborhood in Puerto Rico sits with ancient stone walls stained from years of neglect and remnants of aged graffiti. Within the walls is a small bodega where a proud curmudgeon named Mostro (Juan Carlos Hernández), reigns supreme. Mostro proceeds to dim the light of his beautiful wife Samira (Selenis Leyva) with words of shame and derision when she does not comply to his will. Hernández and Leyva have tremendous chemistry, each of them complimenting the other with affecting portrayals of deeply flawed spouses. Their marriage is at risk from Samira’s affair with the arrogant street hustler Jeison (Victor Almanzar). Although Jeison is very much an anti-hero, dripping with machismo and self-importance, Almanzar’s nuanced performance brings surprising layers of depth and sensitivity. The trio is not alone with their complications however—they are surrounded by a motley crew of vibrant and violent family members and friends.

Instead of focusing on these three prominent characters, Lázaro chooses to weave an intricate tapestry of nearly a dozen people. While each has their own wholly unique story, it is clear that they all have one thing in common: they have all been deeply broken in some way. In spite of this, or perhaps because of this, each character fights ferociously for love and redemption.

Lázaro and Mendizábal’s vision comes alive with a brilliantly cast ensemble. Yadira Guevara-Prip charms as Isis, a nervous schoolgirl heartsick with love for Malena, the enigmatic island belle, played wonderfully by Dascha Polanco. Alexander Flores shines as Toño, an awkward teen torn between supporting and escaping the clutches of Mami, his reclusive and alcoholic mother, viciously portrayed by Lisa Ramirez.

Perhaps the character to be most pitied however, is Palito (Sean Carvajal), an earnest young man who is constantly bullied and prone to rages, a side effect of his Fetal Alcohol Syndrome. Carvajal’s emotional performance of a man struggling to prove his worth in a world that constantly rejects him is genuinely distressing. It is painful to watch his exploitation at the hands of his manipulative brother Jeison and his ruthless girlfriend Tati, played by a fiercely calculating Analisa Velez. Always on the fringes of these characters are vagrants La Gata (Talene Monahon), Hugo (Flaco Navaja) and Mago (Luis Vega). Vega’s street hustler persona is played with an infectious vivacity that makes it hard to focus on anyone else when he is on stage.

This steamy and slow Puerto Rican barrio, guided by director David Mendizábal, wonderfully contrasts with explosive and rich characters spouting poetic verses and vulgarities in multiple languages. Although the ensemble can be hilariously unruly and flamboyant, there is no amount of braggadocio that can mask their unbearable longing for human connection in a country frustrated from being severed and left behind. If anything, their scenes feel too short as the audience aches to witness more and more of each heartrending story in depth. Like Patti Smith’s memoir Just Kids, writer Paola Lázaro has crafted a deeply moving piece which serves as a beautifully raw love letter to the island she calls home.