The Suitcase Under The Bed 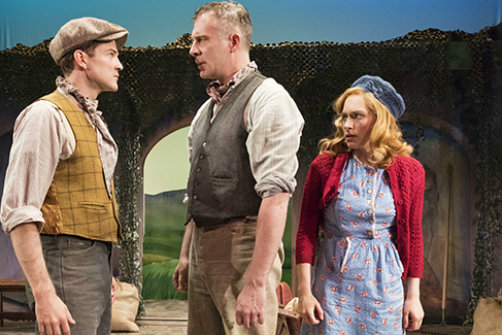 BOTTOM LINE: Teresa Deevy's feminist writing resonates today, even though this collection of short plays was written in the 1930s.

The title The Suitcase Under The Bed refers to the former whereabouts of Irish playwright Teresa Deevy's undiscovered writing. Jonathan Bank, the Mint's Artistic Director and the director of this production, started The Teresa Deevy project in 2009. Though she had six plays produced at the Abbey Theatre between 1930 and 1936, her work had largely been forgotten until the Mint resurrected it. This is the Mint's fourth production of Deevy's work, this time a collection of four short plays.

Bank smartly chose four pieces that play off each other well, forming a cohesive evening even though the characters come from different social classes. The plays all have to do with marriage in some way, and Deevy's cynical viewpoints feel very modern. Even in the happier stories there is an underlying sense of sadness, for as one of her characters says, you need one to have the other. For example, Strange Birth, which starts out the evening, is somewhat of a romantic comedy, with maid Sara Meade (Ellen Adair) getting a marriage proposal from postman Bill (Aidan Redmond). But, given how much those around her are suffering from that very act, Sara is reluctant to fall in love. And although Holiday House may seem like a fun romp in the countryside,  there is regret within the two central couples.

Deevy's female characters are strong and as independent as can be within the constraints of their time period and place. In The King of Spain's Daughter, the only one of these plays to have been previously produced, Annie Kinsella (Sarah Nicole Deaver) rebels against her abusive father. Even in In The Cellar of My Friend, when Belle (Deaver again) makes a disturbing decision after her heart is broken, we recognize that she is acting pragmatically.

Seven actors—the rest are Gina Costigan, Cynthia Mace, Colin Ryan, and A.J. Shively—play all the roles, with many appearing in all four plays, and they do an excellent job of distinguishing between characters. They are helped by Andrea Varga's lovely period costumes. Bank takes his time, allowing Deevy's insightful dialogue to sink in, but this is somewhat of a liability in Holiday House, which could move at a faster pace to bring out the comedy more.

Still, kudos to Bank for bringing Deevy's work to New York audiences. The playwright was also deaf (she lost her hearing at age 20 from Meniere's disease), which makes preserving her voice even more important, since it is still far too rare for the works of deaf playwrights to be seen on the stage. And even all these years after her death, it is still more difficult for women playwrights to be produced than men. I only hope the next generation of Teresa Deevys won't have to keep their work in suitcases under their beds.

The Suitcase Under The Bed is by Teresa Deevy. Directed by Jonathan Bank. Set Design is by Vicki R. Davis. Lighting Design is by Zach Blane. Sound Design and Original Music are by Jane Shaw. Costume Design is by Andrea Varga. Dialects and Dramaturgy are by Amy Stoller. Stage Manager is Jeff Meyers.