For more information on BAM's Next Wave Festival, visit bam.org

Based on stories by Etgar Keret, Adapted by Zvi Sahar and Oded Littman;
Directed by Zvi Sahar
Produced by The Cameri Theatre of Tel-Aviv
Part of BAM's 2017 Next Wave Festival 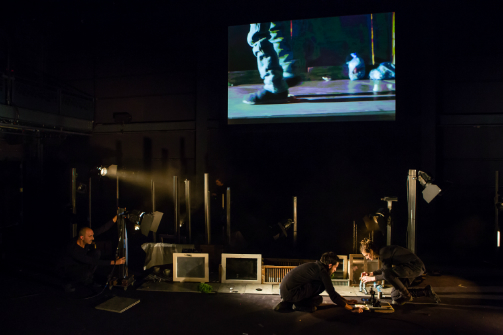 Suddenly, a Knock on the Door is the name of the short story collection by Israeli writer Etgar Keret. It is also how Suddenly begins, a PuppetCinema show brought to BAM’s Next Wave by The Cameri Theatre of Tel-Aviv.

"It's either a story or a bullet between your eyes" demands a stranger (Simcha Barbiro) as he points a gun at the writer's head, not a very relaxed setting for storytelling. The situation only gets more intense when two other "assassins" (Yuval Segal and Neta Plotnik) sneak into the apartment under the pretense of conducting a survey and delivering pizza. Caught in this absurd and dangerous situation, the writer (Nadav Assulin) is not unlike Scheherazade, forced to keep his abusers entertained in order to prolong his life.

This scenario is the framing device to act out about half a dozen vignettes with puppetry. As the three mysterious figures engage in the stories, they enthusiastically make suggestions, stand in for characters, and even assist a puppeteer (Gony Paz) and two cinematographers (Ilya Kreines, Dani Halifa) in moving mini sets and props around.

Window frames and shutters become building facades and staircases, settings for the Puppet Cinema. Two cameras alternate live-streaming action on a big screen above the stage. The video itself might be looked at as an experimental film combining puppetry and real people. But it is the “behind the scenes” process unfolding on stage from which you cannot look away. The attention to detail in the design is incredible and endearingly relatable.

Actors, two camera operators, and a puppeteer, all dressed in black, romp amidst the grove of light stands, playfully bringing to life the stories about human vulnerability. You might only see the character below his thighs (one of the puppets is actually just two legs) but thanks to the inventive staging, clever framing and, of course, the poignant writing by Keret, the entire human soul opens up in front of you.

(Suddenly played at BAM Fisher, 321 Ashland Place, December 6-9, 2017. The running time was 1 hour with no intermission. Tickets were $25. For more information visit bam.org.)

Suddenly is based on stories by Etgar Keret, adapted by Zvi Sahar and Oded Littman. It is produced by The Cameri Theatre of Tel-Aviv. Directed by Zvi Sahar. Set and costume design by Aya Zaiger. Music by Gai Sherf. Lighting design by Ofer Laufer.