The Rape of the Sabine Women, By Grace B. Matthias

By Michael Yates Crowley; Directed by Tyne Rafaeli
Produced by The Playwrights Realm 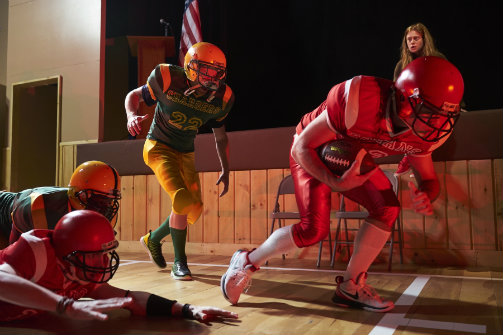 The cast of The Rape of the Sabine Women, by Grace B. Matthias. Photo by Daniel J. Vasquez.

BOTTOM LINE: Susannah Perkins anchors Matthew Yates Crowley's The Rape of the Sabine Women, by Grace B. Matthias with her memorable performance.

As Playwrights Realm's artistic director Katherine Kovner acknowledges in her program notes, a comedy about rape written by a man will be controversial. Michael Yates Crowley, who was inspired to write The Rape of the Sabine Women, by Grace B. Matthias after following the Steubenville case in the media, says that everyone should speak up against violence against women, not just survivors. All he wants to do with the play is make some noise. That is fair. I appreciate artists who take risks, and Crowley does that with his unconventional approach. However, the satire only sometimes comes through loud and clear; other times he seems to be going for a more straightforward narrative, so the tone is not consistent.

In The Rape of the Sabine Women, Grace (Susannah Perkins) tries to make sense of the world after being raped by her football-player classmate Jeff (Doug Harris). The play is sympathetic to Jeff, but also doesn't excuse his assault. Crowley gives some dimension to his characters and often avoids typical high school characterizations. Grace's best friend Monica (Jeena Yi) is a cheerleader who sometimes acts dumb, but also cares a lot about Grace; they have some sweet moments. And Crowley's play is highly stylized, with characters like "The News" (Chas Carey), who reports on main character Grace's rape case and also talks to her.

But because the play is mostly short satirical scenes, the only character who really comes into focus is Grace. Within this abstract world, Perkins delivers a realistic performance of a shy teenager often confused by the world around her. Perkins makes it impossible to look away from her. Adding to the realism is Arnulfo Maldonado's set, which looks so much like a high school auditorium that I had some unfortunate flashbacks walking in. But I quickly forgot about that and enjoyed the pre-show music (sound designer is Mikaal Sulaiman)—marching band versions of popular songs (it's worth getting to the theater early to hear these).

Grace becomes fascinated by the Sabine women and the fact that they married their rapists, the Romans. Another recurring theme is Grace's desire to become a firefighter. At times, Crowley hits the audience over the head with the metaphors a little too much (as with the mascot of the school—the Romans). But the last scene, in which Grace delivers a speech in class, is powerful and moving, and almost makes up for the unevenness of what comes before.

Playwrights Realm, only 10 years old, has been doing great work recently, especially with last season's The Wolves, which will soon be remounted at Lincoln Center. This may not be in as strong shape right out of the gate as that one was—The Rape of the Sabine Women is a world premiere, developed as part of The Realm's Writing Fellowship in the 2014-2015 season, and it could benefit from a bit more development—but Crowley and his director Tyne Rafaeli are almost there. And the theater company clearly understands the requisite responsibility when producing a work about rape. There are trigger warnings both on the website and in the program, which also includes resources for survivors of sexual assault; there is also a sexual health consultant credited (Kat Alexander), which is something I've never seen for a play.

On my way home, I turned on my phone to news that Secretary of Education Betsy DeVos has promised to change the Obama administration's approach to campus sexual assault, claiming to want to protect both the victims and the accused. Considering I just got out of a play exploring how we got to this place of rape culture, in which more attention is paid to the men in sexual assault cases than their victims, I couldn't help but think how unlikely things are to improve any time soon, but it's better to make some noise than do nothing.

The Rape of the Sabine Women, By Grace B. Matthias is by Michael Yates Crowley. Directed by Tyne Rafaeli. Set Design is by Arnulfo Maldonado. Costume Design is by Ásta Bennie Hostetter. Lighting Design is by Barbara Samueld. Sound Design is by Mikaal Sulaimain. Sexual Health Consultant is Kat Alexander. Production Stage Manager is Chris De Camillis.