Rosalee Prichett and The Perry's Mission 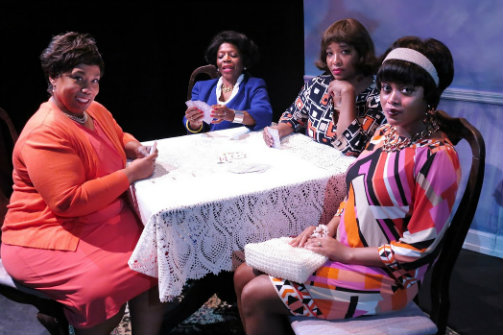 The Negro Ensemble Company’s night of the two one-act plays Rosalee Pritchett and The Perry’s Mission is not for those looking for a mindless night at the theater. Though humorous, campy at times, and heart-wrenching, these performances beautifully turn reality on its head and inspire a call to action for all Americans.

Rosalee Prichett begins with four women—Rosalee (Monique Pappas), Dorry (Malika Nzinga), Belle (Jeannine Foster-McKelvia), and Doll (Joyce Griffen)—playing bridge and having simple “upper-crust” conversation about mindless topics like the prices of their dresses and the dinners at their upcoming parties. Doll comes back at her fellow bridge partners’ every quip with snide comments, a whole lot of pride, and, thanks to Griffin's standout performance, excellent comic timing. The banter quickly shifts from comparing their material possessions to a heavier discussion regarding a curfew put in place for African Americans after riots in their town. This new banter—with the same upbeat rhythm and tone as before—contains veiled and not-so-veiled racial slurs, stereotypes, and off-color comments.

The scene shifts, becoming increasingly eerie. Footsteps echo through the theater until four soldiers in whiteface (Chauncey DeLeon Gilbert, Horace Glasper, G. Anthony Williams, and Chaz Reuben) appear, each with unique and dynamic character traits. The pattern repeats itself—the men's chemistry and banter is on par with the women, and their talk quickly shifts from jokes about women to racial slurs and vulgar, sexual language.

The two worlds then collide as the officers stop Rosalee on her way home. This beautifully staged scene is extremely tasteful, but intense—the soldiers gradually overtake the bare bones car Rosalee is driving. They mock and tease her mercilessly, so convincingly that it attracts verbal reactions from the audience. Thanks to Pappas' haunting performance, the fear in Rosalee’s eyes is tragic. The scene is near impossible to watch but impossible to ignore.

Rosalee Pritchett ends much the same way it began, with four women sitting around a table, with one key difference. Watching Rosalee’s friends attempt to brush their feet and emotional loyalty under the rug is saddening, and a testament to the chemistry and nuanced timing within this play.

After the intermission, The Perry’s Mission begins with the eclectic, hilarious, and highly intoxicated Susie (Maria Silverman) and her strong and silent man of the moment (Reuben) walking into a bar owned by the friendly, easy-going neighborhood bartender (Gilbert). Two haggard businessmen (Daniel Carlton and Buck Hinkle) follow suit, along with two teens (Williams and Aaron Lloyd) who will stop at nothing to sneak a drink. Alone in a corner sits an intimidating militant (Horace Glasper), angry and alert with his eye on everyone.

When her man steps out to the drug store, Susie jumps from group to group, forcing private conversations to turn public, provoking the local customers and unveiling age-old grudges and stereotypes. As things heat up, each class of people attempts to justify why they live the way they do and the role race plays in their lifestyle. The realistic conversation, gripping characters, and—thanks to director Allie Woods—the fast pacing allows the audience to feel like bystanders sitting in the bar watching chaos ensue. The actors have impeccable timing; each does their part to make their character sympathetic and likable, and a shocking ending forces audiences to hold a mirror up to their own lives.

Rosalee Pritchett and The Perry’s Mission are especially fascinating to watch back to back—each plays with and ultimately warps African American stereotypes. These beautifully crafted plays, about the ways people in our country view race, women, and African American culture as a whole, have messages that stick long after the curtain falls.

(Rosalee Prichett and The Perry's Mission plays at Theatre 80 St Marks, 80 St. Marks Place, through April 22, 2017. The running time is 2 hours with one intermission. Performances are Wednesdays thorough Saturdays at 7. Tickets are $25 and are available at necinc.org or by calling 866-811-41111.)

Rosalee Prichett is by Barbara and Carlton Molette and The Perry's Mission is by Clarence Young III. Directed by Allie Woods. Set Design is by Patrice Andrew Davidson. Lighting Design is by Alex Moore. Sound Design is by Jacqueline Ascombe. Stage Manager is Jacqui Anscombe.