Written and Performed by rebirth collective
Produced by Soulpepper 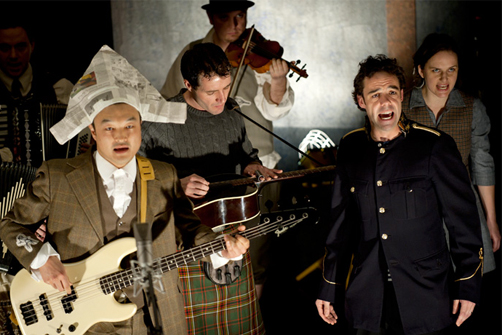 BOTTOM LINE: Soulpepper's hour-long musical thesis on the creative canon of E. E. Cummings is full of tenderness and humor.

It begins with a trunk that's a portal to the realm of imagination. You open it up and get ready for an explosion of sound to echo through your chambers of memories. E. E. Cummings did not conform. E.E. Cummings defied commons notions of style. So why should Soulpepper follow a traditional structure of a musical either?

Cummings' poetry and life becomes the character, the plot, and the thesis of this show, not as a tangible figure, but an enveloping atmosphere that gradually make you feel immersed whole. One after another, rebirth collective members each lead seemingly independent explorations on variations of the theme, using whatever instruments they can play, along with squeaky toys, to produce a marvelous soundscape. And the separate pieces come together like a well-composed fugue—each phrase leads to the next, and is responded to by an echo, a mirroring image, a counterpart.

The various and swift scene transitions are achieved through an intricate pulley system which connects a canopy that separates a section of the stage from the larger space, one that might otherwise be too spacious for the intimate aesthetics of this production. The canopy raises and lowers, becoming both part of the scene and the backdrop for some of the most hilarious shadow works I've seen in theatre. If you enjoyed Pigpen Theatre Company's Old Man and then Old Moon, you'll get a kick out of (re)Birth for its humorous approach to poetry, and sometimes, to the melancholy of life.

Ken Mackenzie is the masterful designer behind the stage magic. But also crucial to this magic is an ensemble of some of the most versatile performers that have graced Signature's space. It is clear that the chemistry and trust they have developed with each other is what makes this well-oiled machine function without a glitch. The piece, after several different iterations, is a polished result of the Soulpepper alumni's explorations around the musicality of E. E. Cummings' poetry. It is a thesis in musical form. Its strength is in execution rather than narrative, which takes a backseat as it is never the intended focus. If nothing else, (re)Birth will spark a fascination with Cummings, and urge audiences to ask questions and get to exploring themselves. Quite possibly, that's enough.