A Room In India 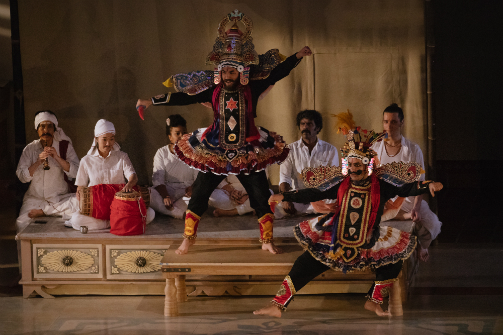 BOTTOM LINE: A Room In India may seem overly ambitious in its frenetic attempt to satirize so many societal crimes, but like Molière, Mnouchkine’s hysterical stage does not serve as a window to an absurd world, it serves as a mirror.

Although an “actor’s nightmare” is a well known comedic concept, the “assistant to the artistic director’s nightmare” proves to be equally fascinating in Théâtre du Soleil’s A Room In India. The fact that this nightmare is inspired by actual events adds great weight to the production, as the famed theatre company really did find themselves studying on an artist residency in India, directly after a large terrorist attack in Paris.

Within this room, a beleaguered assistant named Cornélia (Hélène Cinque) frequently tries and fails to find some rest amidst the psychological breakdown of her boss and mentor. The chaos of Cornélia’s reality is mirrored in her dreams as her room is visited by mythical figures with bizarre cameos by famous artists. Each time Cornélia is on the brink of discovering the answer for solving all of her theatre troupe’s problems, the telephone rings loudly, disrupting the magic and leaving her to grasp wildly at her fleeting memories.

Cornélia is visited by several different gods of theatre including Shakespeare, Chekhov, and the Japanese god of Noh Theatre, with allusions to Antonin Artaud and Bertolt Brecht. These lively and intellectual scenes are often juxtaposed with literal toilet humor (Cornélia mimes using the toilet, with sound effects, several times). Particularly effective is the topic of forced marriage in India, portrayed as both an ancient and contemporary scourge. Corelia’s host is Madam Sita (Nirupama Nityanandan), a female teacher desperate to protect her young servant Rani (Wazhma Tota Khil) from her drunkard father, who is eager to sell her to the highest bidder. This is presented against a scene from the ancient epic Mahābhārata, where a brutish King Duryodhana (the incredible Sébastien Brottet-Michel) attempts to disrobe the honorable Draupadi (Judit Janscó), the humiliated wife of rival nobility, whom he has won in a dice game. The brutish henchman of Rani’s betrothed are mirrored in the mischievous monkey soldiers, played with shockingly accurate physicality by Seear Kohi and Arman Saribekyan.

Although A Room in India provides a great history of French theatre in the form of social satire, it becomes hard to laugh when faced with such a devastating reality. Videos of shell-shocked children and white-helmet responders in Syria, the despair of young people who have defected to ISIS, forced marriages in India—these are not topics to be taken lightly. The importance of theatre is questioned as ticket prices and artist grants are compared unfavorably to the financial needs of poor refugees and desperate hospital budgets. But when it is revealed that a Syrian theatre troupe rehearsed Shakespeare every night while bombs dropped around them, there becomes an urgency for Théâtre du Soleil to tell these stories and provide momentary escapism from the great despair. Nervous chuckling turns into genuine laughter as the audience finds themselves surprised at how much they are delighted by scenes of bumbling terrorists and ISIS propaganda bloopers.

Although there is no questioning the intellectual brilliance of French satire, what steals the show is the vibrant musical epic Mahābhārata told accurately in the form of Terukkuttu, an ancient form of South Indian theatre. Bright and elaborate costumes are paired with non-stop dance and song as the surrounding cast of 35 multinational actors often echoes the lyrics of the passionate epic to the performers. Terukkuttu proves to be a good fit for Théâtre du Soliel, as the immersive aspect fits well within their beliefs of theatre as a community.

Instead of focusing on a single societal ill, Théâtre du Soliel ambitiously focuses on all of them. Terrorism, gender inequality, climate change and the rise of tyranny—just to name a few. Although the intermingling of styles can seem like a cacophonous explosion, it does not feel muddled or messy. On the contrary, it feels appropriate when paired against the nightmarish and frenzied reality of the current war. Cornélia points out that there is no easy solution for ending the war in Syria, or stopping ISIS, or prohibiting bad men from making catastrophically bad decisions. And although it is easy to despair in the absurd reality she has found herself in, Cornélia and the rest of her company continue to persevere, creating new art and making connections to old forms, refusing to cower before dictators and eternally ready to fight for a brave new world. This is a fascinating and intellectual production and should not be missed.