Once on This Island 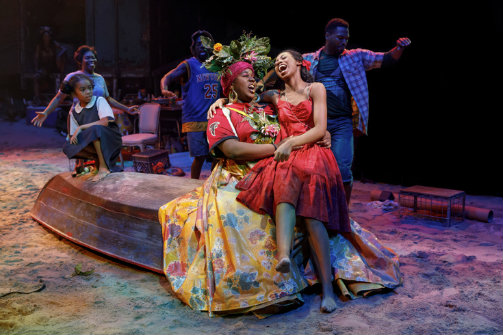 Alex Newell, Hailey Kilgore, and the company in Once on This Island. Photo by Joan Marcus.

BOTTOM LINE: The gods heard our prayer: after far too long away, this musical jewel has returned to New York in a brilliant revival.

Once on This Island is a show about miracles. It tells the story of a girl who should have died in childhood, but instead lives to save another. It is set in a place where nothing ever changes, except when it finally does. The musical itself is something of a miracle, bursting onto the scene back in 1990 and putting its creative team firmly on the map. After an inexplicable twenty-six year absence, its magic is back on Broadway.

Based on a novel by Trinidad native Rosa Guy, Once on This Island is a Little Mermaid-inspired Caribbean fable. Its heroine is Ti Moune (Hailey Kilgore), a poor island girl who dreams of romance. When fate puts the aristocratic Daniel (Isaac Powell) in her path, she is convinced they are destined to be together, despite the class and color prejudice embedded in their culture. Watching Ti Moune from on high are the island’s gods, who themselves are divided: which is stronger, they wonder, the power of love or that of death?

This show about miracles is defined by its miraculous score, which blends calypso realness with Broadway tradition. Lyricist and book writer Lynn Ahrens and composer Stephen Flaherty would later work on the Tony-winning Ragtime and the film and stage versions of Anastasia, but Once on This Island may still be their finest musical achievement. From the opening song, “We Dance,” to the finale, “Why We Tell the Story,” there’s not a dull or wasted moment. Ahrens and Flaherty pack into just 90 minutes all the sensory and emotional impact that most musicals take two and half hours to deliver.

The miracles of the current revival are also plentiful. Director Michael Arden expresses the intimacy inherent in the piece by staging it in the round at the Circle in the Square Theatre; those in the front row should watch out for the sand being kicked up from beneath the actors’ feet. Renowned choreographer Camille A. Brown, making her Broadway debut, uses the cast beautifully in dances that both set the scene and propel the plot. Jules Fisher and Peggy Eisenhauer take us from tropical storm to sunshine and from past to present with their exquisite lighting design. Perhaps most magical of all is the performance of Kilgore, just eighteen years old and plucked out of drama school to head this revival. The term “triple threat” might have been coined to describe her: her powerful voice, explosive dancing, and remarkable acting talent combine to make her a Ti Moune we immediately love and, as the action unfolds, fear for.

The small but mighty ensemble lifts Kilgore up at every step. Most notable is the legendary Lea Salonga, who debuted on Broadway in Miss Saigon in the same season as the original production of Once on This Island. Now a grande dame rather than an ingénue, she radiates grace and power as Erzulie, the goddess of love. Veteran stage and TV actress Merle Dandridge plays the gender-bent role of Papa Ge, the god of death. Also subverting gender roles is Glee star Alex Newell, playing Asaka, Mother of the Earth (in his professional stage debut) and blowing the roof off the joint.

At a moment when class struggles and race relations are weighing heavily on people’s minds, Once on This Island returns as a welcome reminder that the theatre has been helping us to grapple with these issues for centuries and, thankfully, isn’t going to stop now. Despite its fairy-tale trappings, it’s not carefree, Disney-style entertainment; for every moment of joy it produces, there is a moment of sorrow…much like life. Perhaps its most miraculous quality of all is that, though it may generate copious tears, we don’t begrudge a single one, and leave the theatre happier than when we entered it.

Once on This Island is by Lynn Ahrens (book and lyrics) and Stephen Flaherty (music), based on a book by Rosa Guy. Directed by Michael Arden. Choreography is by Camille A. Brown. Music Supervisor is Chris Fenwick. Scenic Design is by Dane Laffrey. Costume Design is by Clint Ramos. Lighting Design is by Jules Fisher & Peggy Eisenhauer. Sound Design is by Peter Hylenski. Orchestrations are by AnnMarie Milazzo & Michael Starobin. Production Stage Manager is Michael Scribner.