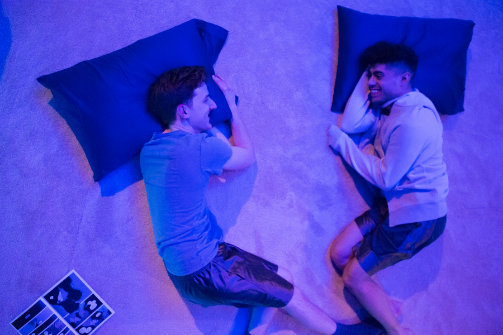 Will Sarratt and Fernando Gonzalez in Omega Kids. Photo by Hunter Canning.

BOTTOM LINE: An intimate play in which realistic dialogue and performances more than make up for lack of high-stakes drama.

If you've ever spoken to a comic book nerd (or have been/are one yourself), the conversations in Omega Kids may sound familiar. Fan theories, reboots, the importance of confirmation of characters' sexualities, how the animated series differs from the comics—Noah Mease gets all the lingo right. But even more impressive than his accurate depiction of comic book culture is the way he uses it to explore universal feelings of human longing.

The two characters, both named Michael, played by Will Sarratt and Fernando Gonzalez, haven't known each other very long. We'll call Sarratt's character Michael and Gonzalez's Other Michael as that is how they're kept distinct at the conference where they met. Michael is crashing with Other Michael outside Boston before moving to New York City to start a new job. There is clearly an attraction (Other Michael is bi and Michael isn't sure what he is), but they are both hesitant. Sarratt and Gonzalez, aided by Jay Stull's direction and Kate Rose McLaughlin's movement, create almost a dance in the way they get close to each other and break apart, building sexual tension. Sometimes one will go to the bathroom or kitchen, and we're left watching one wait nervously for the other to return. It may not be the stuff of action-packed superhero movies, but I'll take realism over fight sequences any day.

As they find difficulty expressing their desires, they keep returning to a comic book, volume 13 of Omega Kids. Mease actually created this issue (his other job as a prop designer probably came in handy here) and there is one on every seat as you enter the tiny theater (a single row of seats surrounds the stage). Michael grew up reading the comics, but Other Michael only knows the characters from the animated series, so he asks Michael questions to put this issue in context. Sarratt perfectly captures Michael's excitement at talking about his favorite comic; Gonzalez does the same with Other Michael's amusement.

The amount of detail in the comic book and in the conversations means that Mease has put a lot of thought into the universe about a diverse group of teenagers with supernatural abilities. It might not be a bad idea for him to write more issues. There is definitely an audience for it. Mease's dialogue is also very realistic, with lots of stops and starts, and he gives us just enough details about these characters so we can fill in the blanks without bogging us down with exposition.

The one small misstep in the production is transitions with flickering lights that seem to add a degree of the supernatural. A play about small moments doesn't need such dramatic transitions and they aren't in keeping with the rest of this delicate production—one that proves that sometimes human connection is all you need for a rewarding night of theater.

The cast is Fernando Gonzalez and Will Sarratt.