By Mark Jackson; Directed by Hondo Weiss-Richmond
Produced by Hunger and Thirst Theatre 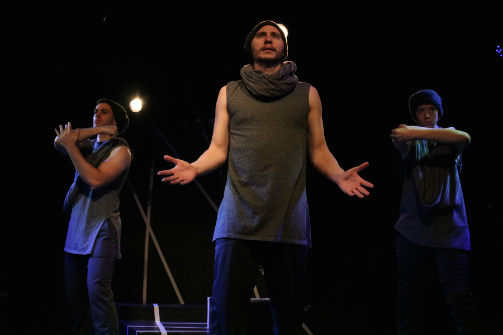 BOTTOM LINE: This pointed adaptation of the Oresteia is an ingenious blend of wit, the essence of the classics, and a poignant commentary on the role media play in the making of history.

Messenger #1 is to the Oresteia what Rosencrantz and Guildenstern Are Dead is to Hamlet. In 90 swift minutes, playwright Mark Jackson manages to account for, in perfect clarity, the dismay in the house of Atreus—from the sacrifice of Iphigenia to the trial of Orestes before the Olympian gods—while developing a unique approach to the ancient tales by zooming in on the experiences of the nameless messengers. They are the sewer rats of history, moving swiftly, unseen, bearing the dirt, the juice, and the scandals before disappearing into a negligible footnote. The language of the play is a delicious blend of snappy exchanges simmered with 21st-century cultural references, and sonorous verses from an epic classic. These two intermittent styles—the lighthearted spirit of parody and the seriousness of retelling a Greek tragedy—are in perfectly balanced juxtaposition. And the play, set within the context of the Oresteia, is really about the role media play in politics.

The three focal narrators—of course Messenger #1, #2, and #3—each has a distinct agenda. Messenger #1 (J.C. Ernst) is a veteran of the Trojan War who might have experienced more violence than he cares to admit. An apparent pacifist and romantic, he reflects on the war with a forlorn sense of denial, and a penchant for flying under the radar in the state of mess that’s postwar Argos. He would be, in the form of media, the neutral voice. Messenger #2 (Jordan Kaplan), a man with a plan, would be a government-owned news resource, a nimble “shape-shifter” who stays close to the ruling class. #2 is fully aware of his strategic position, and uses the power of his mouth to survive the political arena, understanding that his job makes him “the energy that dashes from cause to effect,” “the blood in the veins that moves the nation,” and that he’s the one who would “spread the words that make History happen.”

Messenger #3 (Emily Kitchens) is the progressive, independent media platform who picks up her gig on her own accord. Born into slavery, the female messenger never knew that there was “more to womanhood than two kinds of woman: one made of gold and the other dirt, each doomed to a woman’s life in Argos.” After the departure of her secret lover (who happens to be the war-bound Messenger #1), she pulls a Mulan to have a life of her own, and becomes a real woman by wearing a messenger boy’s clothes. She does and says what’s righteous, following her ideals rather than assignments, like a punk-rock Antigone.

Throughout the course of the play, the three messengers each bring a different dimension to the history they assist in making. This is most illuminated as the story reaches its climax in Clytemnestra’s murder and Orestes’ insanity, when Messenger #1’s account focuses on the brutality committed by Orestes, Messenger #2 paints a villainous portrait of the victim as insurance for his own benefit, and Messenger #3 risks her own life to reveal the truth.

The romance between Messengers #1 and #3 never distracts but rather makes the play even more poignant. Kitchens and Ernst portray their characters with such tenderness and nuanced intensity that their lovely and complex relationship tugs at our heartstrings as the story approaches it's tragic end.Contrasting the star-crossed lovers are the incestuous and maniacal Macbethian siblings Elektra and Orestes (Natalie Hegg and Dan Morrison), a dynamic pair reminiscent of Pokémon’s Team Rocket or the trickster twins Mungojerrie and Rumpleteazer. Hegg and Morrison’s easy chemistry makes the homicidal pair a delight to watch.

It's worth taking notice of the poetically abstract set created by Ghazal Hassani, which consists of dozens of straight white lines with illegible writings hidden within the strokes. The marks extend across the ground and the walls, forming patterns that simultaneously resemble forests and fields, the intricate relationships between the characters, as well as a broken mirror that reflects the story from various angles. Director Hono Weiss-Richmond's dynamic staging makes this action-packed epic almost an immersive experience, as the performers slips through from every direction. Heather Carey's clever costumes, Remy M. Leelike's subtle yet appropriate lighting, and Randall Benichak's sound design are also positive aspects to this superb production.

Messenger #1 is truly a most original and ingenious take on Oresteia, one that is also topical in the current political climate, where the media play such an instrumental role in shaping public opinion. The play calls out, with the voice of Messenger #3, to those who hold the power to change minds, reminding us “that we who inform the world can change the world.” To which Messenger #1 asks: “how are you going to change their world with words when they’ve got daggers?”

“We can make things happen,” Messenger #3 insists, “It’s just that sometimes we forget.” Our age of potential mass destruction is also the age of citizen journalists. The heralds are tweeting and documenting with Facebook Live in every corner of the world. The anonymous messengers of our time have a duty to stay vigilant, and use the power of their words.

Messenger #1 is without a doubt a massive accomplishment. It keeps the essence of the classic Greek plays while making them easy to digest for a 21st-century audience, and it tells a timeless, recognizable tale from a refreshing and topical point of view. It is a truly empowering piece of art—because it tells the truth, and it shows a way to make a difference.

(Messenger #1 plays at Paradise Factory, 64 East 4th Street, through March 18, 2017. The running time is 1 hour 30 minutes without intermission. Performances are Thursdays at 7; Fridays & Saturdays at 8; and Sundays at 2; with added performances on Wednesday March 15 at 7, and Saturday March 18 at 2. Tickets are $20 and are available at hungerandthirsttheatre.com.)

Messenger #1 is by Mark Jackson, based on Oresteia by Aeschylus. Directed by Hondo Weiss-Richmond. Scenic Design is by Ghazal Hassani. Lighting Design is by Remy M. Leelike. Sound Design is by Randall Benichak. Costume Design is by Heather Carey. Movement Consultant is Kristin Calabria. Technical Director is Sacha Spitzer. Stage Manager is Heather Olmstead.