Maps For A War Tourist

Conceived and Directed by Kathryn Hamilton
Produced by Sister Sylvester

Off Off Broadway, Experimental Theatre
Runs through 6.17.17
Dixon Place, 161A Chrystie Street 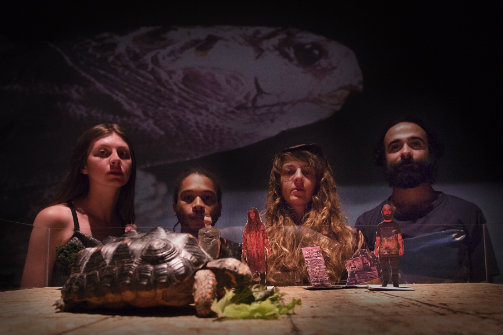 Always trust Dixon Place to present to us art in the rarest and most daring forms. In this case, Sister Sylvester's Kathryn Hamilton brings forth Ayşe Deniz Karacagil's story in a way that's at once grand and intimate. The playing area assaults your senses first: the massive main stage space is covered with white sheets of paper, a surface that extends upwards to the projection screen that's an entire wall. A low humming permeates the air, and everyone sits in stillness save the two tortoises (who are named Squat and Creon) inside a simple terrarium in the corner. And then it all starts, with a story of how Aeschylus died.

The ironically comical death of the father of tragedies happened when an eagle dropped a tortoise on his head, a head we deduced to be bald, because why else would the eagle have mistaken it for a rock? The story thus leads to the comparison between the bird's eye view and the tortoise's eye view, especially when it comes to war. The bird's eye view allows us to examine the big picture, or as Hamilton describes it, "space." The tortoise's eye view, on the other hand, allows us to track a tale through its longevity, or "time." And the story at hand is one of Ayşe Deniz Karacagil, who might be described as a Turkish art student turned protestor turned militant fighter with the PKK, or else, perhaps, a naive and reckless kid who, following an ideal, found herself a war prisoner, and ultimately casualty.

Hamilton continues to tell the story, or rather, report the truth and details about Deniz's life, in her calm and unaffected voice, making it less of a performance, and more of an artful documentary. It's a sincere confession of someone who holds the responsibility to shed some light on a very personal encounter with war. The text is accompanied by live projection from the tortoises' points of view. Designer and performer Kelsea Martin arranges squares silk prints (by Gabe Greenberg) around the tortoises, which turn into massive satellite images of terrains on the screen, and a crumpled up sheet of paper becomes a snow-capped mountain range. The piece then offers various maps: personal ones that hold significance to individuals who had to leave home, and ones we use to track the progression of war. It also talks about the limitations of the maps we follow: from the bird's eye view, we often make mistakes because the distance is too great, and from the tortoise's eye view, we're lost amidst the actions, where it becomes difficult to remain objective.

Maps for a War Tourist introduces the perfect metaphors of individuals' relationship with war. The YPG (People's Protection Units) and the PKK (the Kurdistan Workers' Party) have been on our collective conscious, and the complications of war and various forces in the Middle East have drawn attention from the entire world. However, we usually watch the events unfold through a journalist's lens or on a television screen. Like the eagles flying high above, it's difficult for even the liberal-minded, artistically inclined residents of New York City to realize how close we are to it all. However, once you can put a face to the tragedy, it becomes personal. The young girl in the photo wears a purple hat and is making a peace sign. Her story seems a distant one, but Hamilton's telling of it, with all the details, brings her presence much closer .

Maps for a War Tourist is about the loss of one girl, but it's also about everything she represents: the death of naiveté and a fragile idea amidst the cruelty of war. The sincerity and deliberation of the piece makes it moving. However, the heavily symbolic images and experimental elements also make it at times obscure. The extremely dim lighting and swirl of images can be dizzying if you're not prepared, or if you aren't completely willing to let the poetry of the story in.

(Maps for a War Tourist plays at Dixon Place, 161A Chrystie Street, through June 17, 2017. The running time is 1 hour without an intermission. Performances are Fridays and Saturdays at 7:30. Tickets are $20 ($23 at the door) and are available at dixonplace.org.)

The cast is Kelsea Martin, Cyrus Moshrefi, Jeremy Toussaint-Baptiste, and Kathryn Hamilton. The tortoises are Squat and Creon.