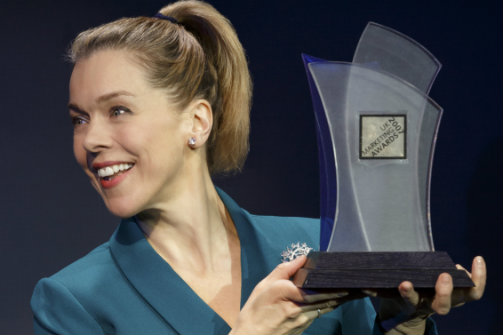 BOTTOM LINE: An influential ad executive is determined to resist the invisibility that comes with being fifty and female.

Linda is on top of the world and she is leaning all the way in. We are first introduced to this powerhouse in a power suit as the lights come up on this new play by Penelope Skinner, directed by Manhattan Theater Club’s artistic director Lynne Meadow. Linda is presenting the pitch that is sure to propel her to even more vertiginous heights. As the senior brand manager of the London-based Swan Advertising, she is introducing a new vision: "visibility." Armed with this buzzword, Linda aims to not only sell a whole lot of face cream, but to create a life-affirming campaign for women over fifty who too often find themselves irrelevant and unseen (except if they’re Helen Mirren).

Linda may have it all, but can she handle it all? Many will put her to the test. First and foremost is the young, sexy and dangerously ambitious Amy (played by Molly Griggs), the new brand strategist whose push to open the market of anti-aging face creams up to millennials is very attractive to the profit-hungry CEO. Then there’s Linda’s two daughters—the 15-year-old Bridget (Molly Ranson), homely and too smart for her own good, and the biting 25-year-old Alice (Jennifer Ikeda), who stomps around the stage wearing a plush skunk onesie, which she refuses to remove even as she begins her work study at her mother’s office. Finally there’s Linda’s "ornament" of a husband, Neil (Donald Sage Mackay), whose mid-life crisis forces Linda to confront yet another hot young woman—Stevie (Meghan Fahy), the lead singer of Neil’s band.

As her career is slipping through her manicured fingers along with her youth and her irresistibility, Linda fights back. She will not be in anyone else’s orbit, she will not disappear, she will be the protagonist of her own life, goddammit! She makes this clear in a scene that is the highlight of the play: an outburst of beautiful anger directed at her daughters, reminding them that she exists outside of her role as their mother. Janie Dee, playing Linda, shines brightest in this scene, where she’s able to drop the Anna-Wintour-meets-walking-TED-Talk act and be a real, slightly drunk, pissed-off woman. She’s not hysterical, menopausal, bitchy or losing it; she’s just angry. This scene prompted spontaneous cheers and claps from a matinee audience.

Beyond ageism and the unattainable expectations placed on women, Linda touches on a patchwork of themes including depression, revenge porn, beauty standards, body mutilation, and the irony of "mindfulness" culture in the age of technology. One subject Bridget raises as she is trying to choose a strong monologue for an audition is the underrepresentation of women in classic theater. Skinner is contributing to remedying this. In fact, Bridget rejects everyone’s suggestion that she should stick with Ophelia and instead dons a beard and commits to King Lear. With an ominous storm, Linda’s position as mother of three daughters (if you include her work-daughter Amy), and the title character’s tragic hubris, the play draws a parallel between the Shakespearean monarch and this woman.

Though Dee is undeniably the Atlas carrying the world of the play—and she does it with praiseworthy grace and ease—I was most struck by Ikeda’s interpretation of a young woman consumed by guilt and rage. Alice has been betrayed by her peers, her mother and men in general. The touching strength that Ikeda brings to Alice’s bleak predicament, and the vitality she injects in what is, admittedly, a somewhat ready-made character is spellbinding and makes us miss her when she’s offstage. I’ve seen Ikeda in several plays before and she continues to be someone to watch.

Despite its slightly jagged path through a plenitude of social topics, Linda goes down smoothy and goes by quickly. In part, this can be attributed to Meadow’s design team, particularly a rotating set by Walt Spangler that adds a cinematic sleekness to the production.