By Jeffrey Sweet; Directed by Meagen Fay
Produced by The Creative Place International & AND Theatre Company 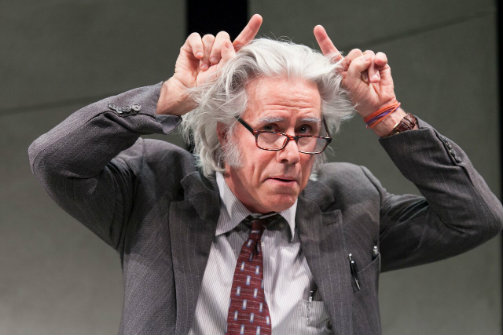 BOTTOM LINE: An intense look at the storied attorney's most famous cases in defense of civil and human rights.

The New York Times once referred to William Moses Kunstler (1919-1995) as "a schlemiel with an edge." Early in Kunstler, Jeffrey Sweet’s incisive play about the controversial legal advocate and showman, actor Jeff McCarthy shrugs off this demeaning characterization, and in a riveting, if rambling, 90-minute trip down memory lane, he describes the many cases that brought him notoriety during his 40-year career. Brash and impatient, he seems a force of nature, his white hair unkempt, his suit rumpled, and his glasses precariously placed atop his head. As he speaks, papers fall to the floor and notes fly off the dais.

But Kunstler was no absent-minded professor.

Instead, he’s the keynote speaker at a 1995 law school forum, and the play situates him on a nearly-bare stage alongside the Vice President of the Program Committee, a young student named Kerry, played with a subtle mix of humility and indignation by Nambi E. Kelley. As Kerry introduces the speaker, an unseen groups of protesters can be heard shouting their displeasure: "Kunstler is a traitor." Other presenters might be rattled by the denunciation, but not Kunstler; he’s clearly comfortable with the attention and the debate he’s triggered.

Indeed, as Kunstler stands behind the podium and talks, his lecture seems like an off-the-cuff review of his role in some of the most important civil and human rights cases of the 1960s and 70s. He starts with a short biography and confesses that he was not always a firebrand. In fact, he says, he was initially a run-of-the-mill suburban lawyer specializing in wills and estates. Yes, he and his then-wife were "parlor liberals," people who wrote checks to dozens of progressive organizations, but he was not himself an activist.

He took his first political case in the mid-1950s, he reports, at the behest of a local chapter of the NAACP, and challenged pervasive housing discrimination in tony Rye, New York. He then went to Jackson, Mississippi, to assist incarcerated Freedom Riders. Other high-profile work included defense of the Catonville 9, pacifists charged with destruction of government property for burning the draft records of nearly 400 men slated for deployment to Vietnam.

Then, toward the end of the 60s, he continues, "Martin Luther King asked if I’d be a special trial counsel on cases that needed someone who was not smart enough to be afraid." Sadly, King’s 1968 assassination derailed this work, but it did not stop Kunstler from continuing to defend the disenfranchised. He represented the Chicago 7 protesters and, in 1971, was asked to serve on a Citizen’s Committee to defuse the Attica Prison Rebellion. In 1974 he was counsel to American Indian Movement leaders Dennis Banks and Russell Means.

As Kunstler pontificates, it’s clear that he’s proud of himself; McCarthy beautifully channels Kunstler's tendency to blur the line between self-deprecation and arrogance. It’s a warts-and-all production and Kunstler acknowledges both the compulsive womanizing that ended his first marriage and the innumerable personal and political gaffes that he made.

For her part, moderator Kerry sits on stage and listens, but her well-timed fidgeting and grimaces—not quite eye-rolling, but close—reveal that she does not see Kunstler as heroic. At the end of the night, as the pair are preparing to leave the auditorium, she's had enough and lets loose. Her argument rests on the fact that in addition to taking political cases, Kunstler willingly represented reputed mobsters as well as confessed rapists. "You have daughters," she says, her fury blatant.

Kunstler’s retort—that every charged person has the right to a vigorous and well-prepared defense— comes across less as a civics lesson and more as a reminder about morality, ethics, and human connection. It’s surprisingly powerful, and twenty-two years after his death, the message remains timely, perhaps even essential.

The cast is Jeff McCarthy and Nambi E. Kelley.