In The Boom Boom Room 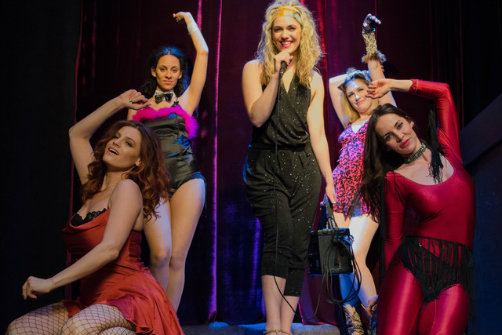 Chrissy, a volatile and frustrated Philadelphia go-go dancer, is the stomped-upon heart of David Rabe's In the Boom Boom Room—she's surrounded by awful parents, violent and troubled boyfriends, and other souls going around in a cycle of zero opportunities, prejudice, and self-loathing. It’s a difficult template that Rabe has created in which virtually everyone, save for the gay neighbor, is unlikable or difficult to root for. And this is perhaps why the show has been revived only a handful of times in the last forty years.

In the Boom Boom Room had pretty heady and turbulent beginnings. It opened on Broadway in 1973, directed by Joseph Papp after he fired the original director, with Madeline Kahn playing Chrissy. It closed after only 37 performances but was nominated for multiple Tony Awards; Kahn lost the Tony but won the Drama Desk. It hasn’t had a major staging since the 1980s.

It’s not surprising that the Chain Theatre Company (which has produced Arthur Miller, Neil LaBute and Sam Shepard) has taken on this play despite its baggage. Their goal, according to the program notes, is to “produce and support muscular storytelling.” As portrayed by an intense, riveting Nina Kassa (who is in virtually every scene), Chrissy, in her remarks about blacks and gays and her attitudes about female empowerment, is rather like the men she knows, objectifying herself through the male gaze in a seedy club. Chrissy hopes to dance in New York and her greatest aspiration is to be a Playboy centerfold. She sleeps with men who either want to possess or mistreat her; she turns on her neighbor Guy (Deven Anderson), the one person who shows her pure kindness; and after declaring she’s determined to establish order in her life, she marries Al (Kirk Gostkowski), a racist brute who has been in jail, like her father and uncles. Although Chrissy gets to New York to dance, she is trapped in even greater sadness and ugliness.

As written, Chrissy is often a difficult character to understand or be engaged by. She becomes enraged at random moments, like when Eric (Kyle Kirkpatrick), her enthusiastic suitor from the club, fails to compliment her. Rabe has a sympathetic touch, showing Chrissy’s struggles to change her lousy situation. She knows something is off, but she can’t figure out what or why. She has the nagging feeling something happened to her as a child, but she doesn’t know if it was at the hands of her jailbird uncles, her womanizing father Harold (Pete Mattaliano), or because of her ice-cold mother Helen (Malikha Mallette). Helen is underwritten but her slippery father, who makes his entrance by picking the lock to Chrissy’s apartment and giving her a not-very-paternal embrace from behind before telling her about having to go to the hospital for “trouble in my prick,” offers much to unpack. Mattaliano is effectively convivial and creepy.

Chrissy's parents remain inscrutable, especially in the overly long second act. You really never know whether Harold molested Chrissy, if Helen had multiple abortions (as she claims) or why she has no compassion for her daughter, or if they simply hate each other and/or her. I don’t know if it’s attributable to Rabe’s writing or Greg Cicchino’s directing or both, but there are too many scenes with Chrissy's parents that don't add much.

The bare-bones set is well used, with Chrissy’s bed sliding in and out of view to indicate a locale change. Although at times the abrupt scene shifts get confusing; I’m not sure whether this is due to directorial decisions, lighting cues, or because Chrissy is rarely offstage.

I think for twenty-first-century audiences, In the Boom Boom Room, written when second wave feminism and gay rights were still really in their infancies, is challenging. In the era of Archie Bunker, therapy and talking about feelings were still novelties; in this sense, the play makes for a time capsule of sorts. The fact that there’s no catharsis or resolution also distinguishes this play from a lot of modern drama. It’s a polarizing show that won’t be to everyone’s tastes, but it’s a chance to see a Rabe play that gets far less attention than his other works and features a lead actress worth watching.

(In the Boom Boom Room plays at the American Theatre of Actors, 314 West 54th Street, through May 6, 2017. The running time is 2 hours 20 minutes with an intermission. Remaining performances are Wednesday, Thursday and Friday at 8; and Saturday at 2 and 8. Tickets are $18 and are available at chaintheatre.org or by calling 866-811-4111.)

In the Boom Boom Room is by David Rabe. Directed by Greg Cicchino. Choreography is by Sharon Lynn. Set Design and Lighting Design is by Aaron Gonzalez. Sound Design is by Jason Subotnick. Dance Captain is Cori Stolbun. Stage Manager is Rafaella Rossi.