A History of Servitude

By The Department of Fools

Off Off Broadway, Sketch Comedy/Masks
Runs through 3.3.17
The PIT Underground, 123 East 24th Street 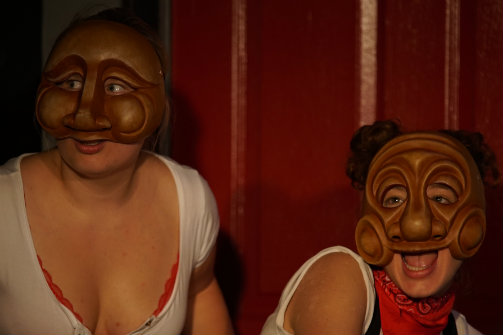 Anna Tempte) and Silvia Morigi in A History of Servitude. Photo by Sascha Taylor Larsen.

BOTTOM LINE: A wild, highly inappropriate journey through time, as told by a commedia group of Fools— masters and servants alike.

A History of Servitude is back! After a highly praised run at the 2016 NY Fringe Festival, the show is now running indoors at the People’s Improv Theater. These characters have been around for much longer though; Commedia dell’Arte, the style of comedy employed by The Department of Fools, as they call themselves, goes back to the Italian Renaissance. In this classic, raunchy, scatological, outrageous show, masks (by Jonathan Becker) serve to protect the actors from blame. After all, they’re not saying and doing these things, their characters are!

Commedia is the granddaddy of improv and sketch comedy, so there’s something deeply satisfying about the symbiosis between this show and its location. While they’re employing time-honored scenarios and stock characters from commedia and improvising around them in the basement, some Improv 101 students are learning to Yes-And upstairs.

In this version of History, Il Dottore, played with mastery by Matthew A.J. Gregory, has created (or so he claims) a time travel machine that has brought the troupe to this time and place. Together, they will present us with reenactments of the past. Il Dottore, with his fellow masters Pantalone (Yair Ben-Dor) and Capitano (Alec Seymour), are the vociferous narrators. Little do they know, however, that their servants, a blabbering group of idiots, have planned a takeover. As we travel from Ancient Egypt to the Age of Exploration to Mozart’s Vienna to Trump’s Presidency, the servants refuse to stick with the "real" history of the elite and instead recount that of the commoners.

Some standout sketches include the journey to the construction of the pyramids and Pharaoh’s death. The actors manage to seamlessly mix heavy physical comedy (think Godot with pyramid stones instead of bowler hats), dark witty banter, and a Weekend at Bernie’s schtick. In another scene, servants Colombina (Anna Tempte) and Arlecchino (Silvia Morigi) are ordered by Capitano (playing Christopher Columbus) to go steal Pantalone’s money so they can go sail the ocean blue. Or rather so the servants can row them there. Between Tempte’s beautiful interpretation of a totally pathetic character and Morigi’s quirky and uncoordinated Fool, the scene is a riot. Ben-Dor is a thoroughly impressive physical actor, with the timing worthy of his place in this cast of comedians. Finally, in a peek example of how thoughtful this cast is about its comedy, a song about women in history is spearheaded by the ensemble’s three female actors. This act succeeds in injecting some well-needed estrogen in a show where—in line with history books in general— the history of man is the history of men.

This is not the place for Method Acting (ironically, many of the cast members attended the Lee Strasberg Institute); this is all grotesque and heavy-handed. But in this explosive performance, true satire comes out. In a skit they title Medley of Disasters, the Fools present a pageant of catastrophes and tragedies from history (think Hindenburg and Chernobyl). In a brilliant moment of self-awareness, they walk right up to the edge of an unfunny, borderline offensive joke (think 9/11), only to backtrack with the grace and tactfulness of the clowns they are. That moment stays with me as a brave act of brilliance.

On their program, the show is sold as "totally un-PC." I beg to differ; the masks, the ambiance, and the history of this form make the offenses harmless and the general experience devoid of personal attacks. Overall, you could actually say this show serves as a guidebook of how to do politically correct comedy. Go see A History of Servitude for the cast, the laughs, the political commentary, and the balloons.

A History of Servitude is by The Department of Fools.