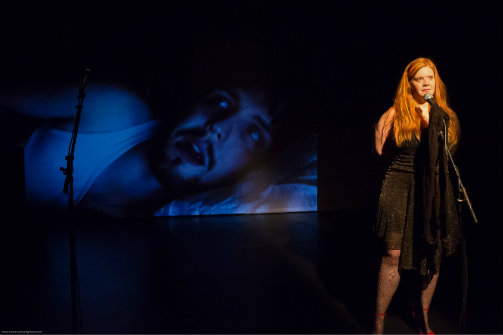 BOTTOM LINE: Music and Skype carry a couple's love across long distances and past stack upon stack of immigration paperwork.

The photo stream leading up to Greencard Wedding is laden with whiskey bottles, musical instruments, and unfiltered selfies of a reasonably happy couple. We see cupcakes decorated with shamrocks, and, at one point, a cancelled visa; the color of the official stamp is a menacing shade.

It's October 2012: boy meets girl on the L train platform. It seems the kind of beginning most appropriate to a New York romance, and the relationship between Connel Byrne (Ryan McCurdy) from Carlingford, Ireland (famous for fish and whiskey) and Joy Fine (Jody Christopherson) escalates fast. An awkward but productive flirt session lands Connel a subletting deal on Joy’s couch, along with the formation of their band: Greencard Wedding (a favorite tease for anyone who's in the US on an visitor visa). And marriage proposals do get thrown out in the band's act, since a wedding is the only swift way to guarantee Connel’s residential status in America. But they’re not really getting married, since that's too complicated for two people who barely know each other.

Greencard Wedding is framed as the band's last concert before Connel’s visa expires. Boozy wedding cupcakes are served, and Irish toasts are given. One audience member even gets picked to wear the set list T-shirt. The fourth-wall-breaking concert is then intercepted with clips of Skype calls that show the couple struggling with their long-distance relationship. The innovative structure makes the piece a kind of live version of a concept album about the artists’ very real life.

The prominent use of multimedia doesn't remain separate from the live performers. In many scenes, a live performer interacts with someone seen in pre-recorded videos. The perfectly timed and executed interactions, reminiscent of Brief Encounter, add an interesting dimension. One comedic highlight is David Anzuelo's Unka Dave, the guitar instructor on DVD (Learning Guitar with Unka Dave for Absolute Fucking Beginners), with the flair of a YouTube instruction video host.

The show’s delightfully glamourless protagonists, as well as its musical style, evoke Glen Hansard and Marketa Irglova’s Once, or an early Richard Linklater film. Martha Goode’s projection design plots a typical path for the pair: the backdrop goes from Dixon Place to the Delancey, from Parkside Lounge to the Bitter End, a journey all too familiar to this city’s struggling artists. Along with a repertoire of original songs, it’s also important to note that McCurdy’s cover of U2’s "With or Without You" is nothing short of marvelous, with an excellent use of loop pedal. Christopherson’s dramatic scenes are witty and poetic, while the narrative that progresses through Skype videos is close to cinéma vérité.

What starts off as a breezy romantic comedy is hit with a reality check when the musical moves on to the truthful struggle of Connel's application for an O1 Visa (for "Individuals with Extraordinary Abilities," better known as the Artist Visa). Greencard Wedding hits home here, exposing much of the ludicrous application process and the hurdles of catch-22 elements. For instance, the O1 is only issued to those who can show projected sources of steady income in their chosen field for up to three years in the future, and this certainly cannot include bartending. It’s a long game of waiting in solitude, with the added flavor of uncertainty, that could drive anyone mad. The show doesn’t sugarcoat the fragility of the pair’s relationship as both begin to falter under the pressure of their indefinitely prolonged separation.

The bittersweet tale, told in tenderness and candor, is deeply personal to its creator, which makes it easily relatable. There’s also a level of playfulness in this production that will likely win much sympathy from its audience.