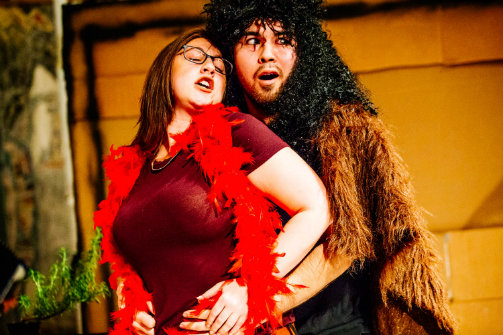 Considered the world’s oldest recorded story, the ancient Sumerian Epic of Gilgamesh has influenced countless succeeding tales, from the Bible to Beowulf to Toy Story 3. Continuing this centuries-old tradition, the "joke-folk" musical Go! Go! Gilgamesh! offers a lively parody of the ancient saga, infusing the Gilgamesh story with contemporary wit while honoring its timeless themes of hubris, love, and heroism.

As in many epics, Gilgamesh begins with an origin story: bored with their earlier inventions, gods Shamash (Michael Perrie Jr.) and Ishtar (Susan Hwang) create the hero Gilgamesh (Phil Feldman), a superhuman strongman and "wicked badass king" of ancient Uruk. "Two parts god, one part man," and one hundred percent bro, Gilgamesh’s people grow tired of their ruler’s selfish arrogance and pray for his comeuppance. When the gods reply by sending wild man Enkidu (Paris Ellsworth) to terrorize the countryside, Gilgamesh retaliates by sending Uruk’s finest prostitute (Yael Rizowy) to seduce the creature—a move that leads to Enkidu’s banishment from his Edenic forest home. Journeying to Uruk in search of vengeance, Enkidu discovers in Gilgamesh a worthy adversary and the two become "ultra-best-est friends," traveling the world in a series of violent adventures. When their slaying sprees end in Enkidu’s premature death, a grieving Gilgamesh sets out to resurrect his friend and find the key to eternal life. In a pattern which future societies would adopt as the quintessential hero’s journey, Gilgamesh’s quest uncovers the frailty of human existence, the importance of humility and compassion, and the undying strength of the ideals for which we fight.

Gilgamesh’s ensemble tackles its subject with unbridled enthusiasm, finding comedy and humanity in the ancient tale. Ellsworth brings energy and charm to the savage Enkidu; his chemistry with Feldman’s studly Gilgamesh is palpable and a joy to watch. As love-and-war goddess Ishtar, Hwang’s calculating dea ex machina harbors an all-too-human attachment to her creations and resentment of Gilgamesh for spurning her advances. Gilgamesh’s music similarly blends irreverence and insight: its catchy folk songs mock the original’s hyperbole and violence, but softer numbers such as "Man of The World" and "If I Can’t Live Forever" tenderly encompass mankind’s struggles with loss and mortality. More impressively, each cast member contributes to the show’s live score, accompanying the action on guitar, violin, accordion, keyboard, and Korean janggu drum. Gilgamesh’s visuals add to its comedy: cartoonish paper-and-cardboard sets become Mesopotamian citadels, primeval forests, and rugged mountains, while a "Graphic Sex!" banner stands in for the epic’s prolonged love and fight scenes. Likewise, Gilgamesh and Enkidu battle a variety of papier-mâché puppet monsters, from Ishtar’s sacred bull to a Cookie Monster-esque tree spirit.

While Gilgamesh yields many a laugh at the expense of its archaic source material, its snark belies a musical virtuosity and a deeper respect for the archetypes it carries. Though our lives are finite and rarely the stuff of legend, the wisdom of our stories can survive the ages. As the closing number astutely notes, our tales, and our love, "can be death-defying too."