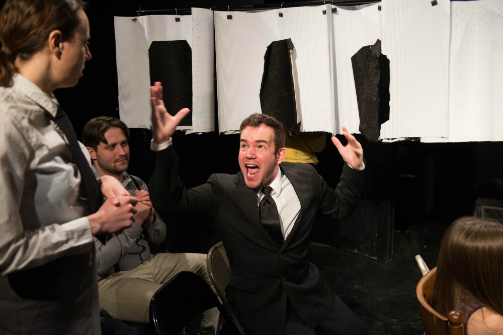 BOTTOM LINE: A wistful and quirky look back on a small collection of timeless Twilight Zone stories.

There is A Fifth Dimension accessible in the Kraine Theater. It is a play both farcical and horrific. It is the middle ground between light and shadow. This is the dimension of imagination. It is a parody of an area which we call...The Twilight Zone.

If you read any of that in Rod Serling's voice, there's a chance you'll get a kick out of this new play featuring eight loosely connected short stories, all adapted from classic Twilight Zone episodes. However, whereas the original television program had a psychological horror feel to it, this production is sentimental and sort of goofy, punctuating scene changes with 80s pop music and cartoon theme songs. Calling on tropes from the past, present, and future, this comedy shows the timelessness of the ideas embodied by the original show.

Nine actors take turns appearing in ten-or-so minute scenes that each give the audience a taste of the larger tragic and/or terrifying circumstances in which the story takes place. From sentient ventriloquist dolls to alien takeovers, the play covers some really weird material and remains easy to follow. The location and time period of each one is unclear, but the structure, along with some hints dropped in the dialogue, do a good job of making me think about the strange and potentially frightening events happening all over the world right now. A lot of concepts lifted from the source material remain relevant to the world thirty years later.

By the end, writer Genny Yosco (who also plays several roles) has managed to turn what, in the original Twilight Zone series was mysterious and spooky, into something more bizarre and even a bit silly. This is definitely a show for the fans, who will appreciate the time and care put into lampooning the source of their nightmares. Though some of the writing is pretty clever, a lot of the comedy and references will be lost on people who aren't familiar with the show.

A Fifth Dimension: An Unauthorized Twilight Zone Parody is written and directed by Genny Yosco. Costume design is by Chris Weigandt.