By Seth Zvi Rosenfeld; Directed by Scott Elliott
Produced by The New Group 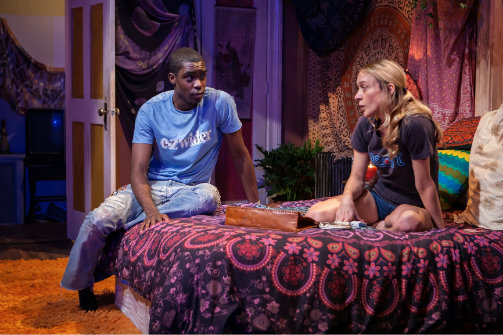 BOTTOM LINE: An excellent new play about loyalty, drug addiction, and gang violence in the 1970s.

I was first taken by Chloë Sevigny’s brilliantly understated acting back in the 90s—a heart-wrenching performance in Kids, and Brandon Teena’s young lover in Boys Don’t Cry. It’s thrilling to watch an actor who rose to stardom playing teenagers now taking on the role, in Seth Zvi Rosenfeld's new play, of a forty-year-old mother of two kids who are entering adulthood. In Downtown Race Riot, Sevigny plays Mary Shannon, a woman who organizes her whole life around her drug habit. She plans on sustaining her lifestyle by suing her landlord for lead poisoning.

What makes Sevigny such an arresting actor is her relentless honesty. The youthful naiveté in her eyes is here replaced with the lethargy and disappointment that comes from a turbulent life. She is so present that every emotion and state of mind she conveys is authentic. None of her dramatic outbursts are exaggerated or put-upon. One gets the sense that Sevigny is doing everything she can to restrain herself, until she simply can’t contain what she’s going through.

As the play opens, Mary is coaching her unhinged but devoted son Jimmy (David Levi) on what to tell her attorney (Josh Pais), a man whose services she secures with drugs and the promise of sexual favors. Meanwhile, Jimmy is involved with a gang that is planning a race riot against people of color in Washington Square Park. Ironically, Jimmy’s best friend Marcel Baptiste (Moise Morancy), a black man who is disgruntled with the African-American community, will also participate in the riot. When Jimmy learns that the gang is planning on betraying Marcel, he is tortured by questions of loyalty and friendship.

The New Group’s artistic director Scott Elliott conducts this brilliant cast like a virtuoso maestro with Sevigny as his concert master. Cristian Demeo and Daniel Sovich shine in their supporting roles as the other gang members, and carry themselves with a seductive and charismatic danger that you love to fear. The impeccably choreographed stage combat is startling and alarming—the brawls will make you jump. Kudos to fight choreographer UnkleDave’s Fight-House (which, incidentally, sounds like a company that might have been started by the characters in this play).

Derek McLane’s wonderfully detailed and expansive set is just as compelling as the play itself. He presents us with three distinct rooms dressed so eclectically that they could belong to different locales, although they are in fact the three rooms of the Shannon family’s cramped Greenwich Village apartment. Every millimeter of the stage is dressed with clues about these people. This is not the first time that I’ve singled out McLane’s work, and he is quickly becoming my favorite set designer of all time.

Rosenfeld’s play is equal parts gritty, sexy, and violent. It’s Eugene O’Neill meets Martin McDonagh, with a splash of Harold Pinter. Like Sevigny’s performance, Rosenfeld’s play is brilliant in its honest understatement. He never resorts to melodrama or sensational histrionics. His characters are just simple people trying to survive a dangerous world and doing what they can to escape its harsh reality.