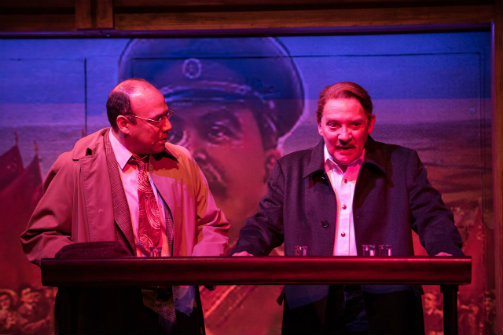 BOTTOM LINE: Utterly engrossing, this alternately chilling and darkly comic fictionalization of the short life of writer Isaac Babel offers disturbing parallels between the Russia of old and the Russia of today.

Describe the Night brings three interweaving story lines vividly into focus over three acts. The first begins in 1920 Poland, when intellectual Babel (Danny Burstein), then a soldier in the Red Army, meets volatile, uneducated Nikolai (Zach Grenier), a Captain. Nikolai is the kind of man who thinks “too much memory makes a man weak.” Yet it’s an enlightening encounter for both as they argue over language and truth. As Nikolai frames it, “Fact is what happened, and what didn’t isn’t fact.” Babel, who writes of his war experiences in his journal, challenges that assertion through telling stories. Years later, after Babel’s fame has grown, he meets Nikolai’s unlikely, gentle wife Yevgenia (Tina Benko), a woman who studies the planets and predicts a future of nothing but war.

The second story begins in 2010, in a bleak car rental agency in Smolensk right after a plane crash many still believe was sabotaged by the Kremlin. On board were the Polish President Lech Kaczyński, his wife, and other key members of the Polish government. The rental attendant Feliks (Stephen Stocking) reluctantly lets in Mariya (Nadia Bowers), a journalist who had seen the crash and is now on the run from the police.

The third begins in pre-glasnost 1989, where a wily Nikolai, still alive, presides over Bureau 42. He spars with Vova (Max Gordon Moore), a young KGB agent, over what’s in his file. Vova insists it contains lies, and with the simplest of gestures, Nikolai fixes what is true, courtesy of a black pen. He then tasks Vova with surveilling his granddaughter Urzula (Rebecca Naomi Jones), who lives in Dresden with her grandmother. Although Urzula intends to escape to West Germany, things soon get more complicated.

Part of the great fun comes from seeing how the stories intersect as the play shifts between different time periods and relationships. Rajiv Joseph does a masterful job crafting rich characters whose tragedies and triumphs are immediately compelling. Joseph deftly moves between horror and black humor as he critically examines the ways in which officials with unchecked power operate, a theme clearly inspired by the occupant of the White House and Putin (whose nickname—spoiler alert?—just happens to be Vova). Director Giovanna Sardelli displays a skilled hand in keeping the many moving pieces flowing gracefully, no small feat with a production of this length.

The design team here is essential. Although there are titles projected at the beginning of each scene, audience members who miss them will be ably guided by Tim Mackabee’s sets (the largest file room to ever be on stage, I’m sure), Lap Chi Chu’s lighting, and the sound and original music by Daniel Kluger. And Amy Clark and Leah Loukas provide pitch-perfect costumes and wigs, respectively. The beard that Nikolai sports in 1989 is particularly memorable.

Describe the Night is expertly cast, with an ensemble headed by Burstein, who is warm and funny whether he is wooing Yevgenia or arguing with Nikolai. Benko, as the other half of the ill-fated couple, brings a depth to a character who could easily have been merely a superstitious woman married to the wrong man. And Grenier is magnetic. Even though the brutish Nikolai is ultimately a villain, Grenier taps into the character's complexities, especially in his more tender moments with Babel. But Grenier is at his best when portraying Nikolai as the old school apparatchik outfoxing his enemies and underlings.

Before he was executed by firing squad during Stalin's Great Purge, the real Isaac Babel had a life worthy of a three-hour production. He was a successful journalist, playwright, and short story writer whose works, such as Tales of Odessa and Red Cavalry, are world-renowned. While married with a child, he fathered two children with his mistresses. He also had a lengthy affair with the wife of one of the heads of the NKVD (the secret Soviet Police), which would lead to his murder and, for a time, being wiped from history. Yet the incorporation of real historical figures is hardly the most significant aspect of Joseph's script. With the investigation of possible collusion between the U.S. and Russia dominating our 24/7 news cycle, Joseph’s warnings about politics, corruption, and manipulation couldn’t be any more resonant right now.