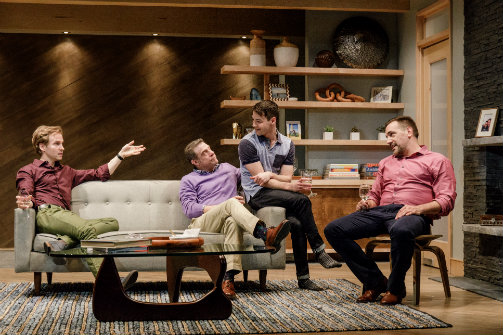 BOTTOM LINE: Unexpected events overtake a “perfect” life in this new play that wrestles with the necessity of gay marriage.

Daniel’s Husband begins like many gay plays. Perfectly appointed living room? Check. Dinner party just concluded? Check. White gay men engaging in witty banter? Check. Obligatory jokes about how young one of them is? Check. (Although is a 23-year old really that amazed by seeing an actual record album?) And most important, topical debate dujour (in this case gay marriage)? Check. And it’s here where the conversation really gets heated, because—surprise!—not all gay folks actually want to get married. Like Mitchell Howard (Matthew Montelongo), successful gay novelist and the longtime partner of accomplished architect Daniel Bixby (Ryan Spahn). Even though Daniel wants to get married, Mitchell refuses. As he tells young Trip (Leland Wheeler), he doesn’t believe in it, and chafes under the very idea that gays should aspire to be average, just like everyone else.

This isn’t the first time Daniel and Mitchell have argued over this question, as their friend Barry (Lou Liberatore), knows all too well. And if Barry knows to hold his tongue on this particular issue, Daniel’s mother Lydia (Anna Holbrook) is less subtle. “Why aren’t you two married yet?” she presses, within minutes of arriving for a visit. Daniel tries to tolerate her, but can barely contain his rage—in his mind, she was a terrible mother, self-involved and soul-destroying for Daniel’s father.

The first half of the play is mainly awash in gay-play tropes (gay men and their mothers—another check). And this extends to the design—Brian Prather’s set, seemingly ripped from the pages of Elle Décor, is the ideal expression of Daniel and Mitchell’s “perfect” life. If at times it’s unclear if Daniel and Mitchell actually have taste or just think they do (apparently Kinky Boots resolves the “Cyndi or Madonna” question), it initially seems as if a sly commentary on contemporary gay culture might be just what playwright Michael McKeever is going for. But as the play continues, we realize that the material in first half—Daniel’s love for his home, his feelings about his mother, and his enduring love for Mitchell (who he really wants to marry)—have all been setting us up for the second half, when…well, when things take a bit of a turn.

If Daniel’s Husband turns out to be something other than a gay comedy of manners, McKeever’s characters certainly get more complex as the play gets more serious. The five actors deserve much of the credit here, especially Holbrook, who turns what could easily be a common stereotype (the rich, entitled, interfering mother) into someone you almost feel bad for. Wheeler is also excellent as Trip, the kind-hearted young man who is wise beyond his years, and deftly brings out the unabashed confidence that seems to be the hallmark of the modern gay twenty-something. Liberatore does well at humanizing the wise-cracking friend who always has a new boy to show off. Spahn perfectly captures the blasé privilege of a guy who has no idea just how enviable his life is. And Montelongo, the emotional center of the piece, is heart-breaking in his determination to do whatever he can to protect the life he has built.

But as much as I want to champion this play, a few things give me pause. Brancato’s direction is extremely well paced, but the choice to have an all-white cast (save for a brief appearance by a silent, unnamed actor of color) is disappointing, to say the least. But it’s McKeever’s ultimate polemic, even more than this production’s racial politics, that I find troubling. Certainly McKeever is to be applauded for giving voice, however briefly, to a queer critique of gay marriage. If perhaps a bit high-flown at times, Mitchell’s rant about the normalization of gay culture is rarely heard in mainstream gay theater, and thanks in large part to Montelongo’s passionate delivery, it provides a helpful counterpoint to all the talk about the desirability of heading to the altar. If only McKeever kept arguing both sides of the coin.

While McKeever wisely avoids spending over 90 minutes simply debating the necessity of gay marriage, his position becomes quite clear by the end of the play. And just in case you couldn’t tell, the on-the-nose exit music—Magnetic Fields’ “Book of Love”—should make his stance crystal clear. To be fair, the intended audience of Daniel’s Husband will likely find this play a deeply moving cautionary tale. But insofar as it teases us with a much-needed discussion before using scare tactics to convince us of the best way to be gay, Daniel’s Husband unfortunately chooses to advocate for normalcy rather than truly question the status quo.

(Daniel’s Husband plays at the Cherry Lane Theatre, 38 Commerce Street, through April 28, 2017. Running time is 95 minutes, no intermission. Performances are Wednesdays through Fridays at 8, Saturdays at 2 and 8, and Sundays at 3. No matinees April 16 or 22; additional performance on Tue April 25 at 8, and Wed April 26 performance is at 2, not 8. Tickets are $72. $20 student rush one hour before the show at the box office, and $35 tickets available in advance for those 35 and under. For more information and to purchase tickets visit primarystages.org or call 212-352-3101.)