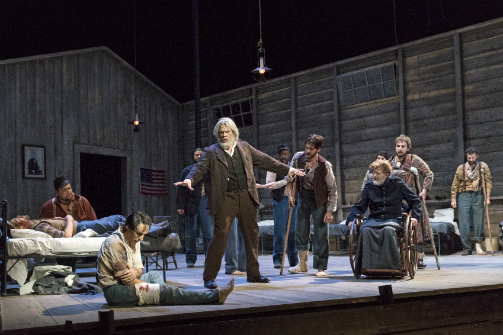 The Cast of Crossing. Photo by Richard Termine.

“What is it, then, between us?” This, the first line that Walt Whitman (baritone Rod Gilfry) sings in Crossing, is borrowed from Whitman’s “Crossing Brooklyn Ferry,” as is the sentiment of human bond conquering the barrier of space and time. Composer/librettist/conductor Matthew Aucoin pays homage to Whitman’s fondness for opera in the prologue, instantly connecting the character to us:

I have sat where you sit

Looked upward as you look –

Have felt the thrill

Gilfry, in a brown suit and hat, paces in front of a screen with scrolling handwritten lines (video projections by Finn Ross), hypnotizing the audience like a pendulum. The screen raises as the poet descends into his memories of volunteering as a nurse for Union soldiers in a Civil War field hospital. Jennifer Tipton's low-angled, cold white light literally illustrates the lyrics, throwing shadows of soldiers on the hospital walls, as if their souls are barely attached to their wounded bodies. Tom Pye's appropriately shabby hospital room set shrinks, and the all-male chorus doubles visually in size as each is accompanied by his own shadow.

Crossing delicately interweaves fantasy with Walt Whitman’s biography and poetry in a dream-like, haunting narrative. The beloved American poet indeed volunteered as a nurse in the army hospitals during the Civil War. Memoranda During the War, a book Whitman published in 1875, inspired Aucoin’s Crossing, although the core of the story, the poet’s romantic involvement with John Wormley (tenor Alexander Lewis), a Confederate soldier in disguise, is fictitious. Despite the liberties of the plot, the portrait of Walt Whitman is compelling. Like an impressionist painting, Crossing captures the ever-flowing inner essence of the poet.

Aucoin's libretto explores the vast and overwhelming sensation of interconnectedness through shared experiences, whether that is attending the opera, falling in love, or going to war. This theme of oneness is just one of the ways Aucoin references "Crossing Brooklyn Ferry"; the aria that ends the first act even borrows some lines from Whitman's 1856 poem.

And while Aucoin also draws from this same Whitman poem in his aria “Once I lay…”, he does it in a completely different way. Freddie (bass baritone Davone Tines), a runaway slave, tells both his life story and a horrifying vision of future wars. Tines’ hollow, slowly expanding voice is accompanied by the subtle swaying of his head, which creates a beautiful reverberating effect. The twenty-six-piece chamber orchestra, A Far Cry, seems to almost start playing a soul tune, but never does.

Indeed, Crossing often tricks you into thinking that you are about to hear a rendition of a certain style or genre. When the messenger (soprano Jennifer Zetlan, the only female voice in the piece) brings the news of victory, and Whitman encourages everybody to rejoice, we expect the chorus to burst into a patriotic martial song. Instead, we hear the frustrated moaning of the soldiers tortured by lowliness and PTSD.

The events between 1862-1865 are oddly reminiscent of present day concerns: a divided country at war and “souls half torn from their bodies.” Fittingly, the slowly unfolding score and atmosphere remain grim and melancholic until the end. The hospital floor crowded with beds is cleared in the second act, but the landscape that replaces it is even more depressing. A background photograph of ruin, a bare tree laying on the ground, and the chorus now dressed in modern-day attire, all sink in fog.

A few, minor critiques: perhaps the choreography of four dancers dressed as Union soldiers is a bit of a cliché, and the video projections could be similarly fine-tuned. An American flag fluttering against a stormy sky is overkill for an opera so subtle and nuanced, both musically and poetically.