By Carl Holder; Directed by Meghan Finn
Produced by The Tank

Off Off Broadway, Play
Runs through 4.29.17
The Brick, 575 Metropolitan Avenue 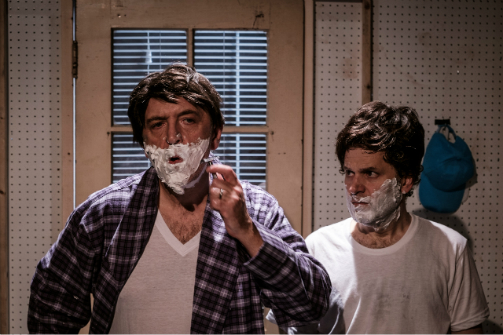 BOTTOM LINE: Generations of Charleses through the ages, their shared memories cradled in wood, and their ongoing legacy expressed in a perfect sandwich.

We meet the first Charles (Richard Toth) in his workshop. It's a typical man’s workshop, almost stereotypically so: power tools on pegboards, that sort of thing (designed superbly by Peiyi Wong and Hannah Cook). Charles knocks the legs off two high back chairs and sticks them atop a set of twin rocker bases. The strange piece of furniture turns out to be a cradle (kudos to Mark Zlotsky who co-designed the piece), in which Charles’ son, also called Charles (Mike Shapiro), learns to say his own name. And this sets off Carl Holder’s enigmatic and multi-layered play.

The first part: a delightful family video montage. We see our patriarch—a stern, Clint Eastwood type, complete with flannel shirt and baseball cap—make a copy of himself in his son, who inherits his father's tastes and habits, down to the scowl on his face. The father-son love is elaborated in the words they never say, and in the moments they share, like shaving together in front of the same basin. As the wheel of time spins forward the son turns into a father himself, and we’re back to the beginning—life is set to repeat itself, only with slightly different faces. Charles II tries his old man’s bag of tricks on his own son Charles (Fernando Gonzalez), as they go through the same growing pains. But of course nothing turns out the same: little Charles picks books over baseball, and prefers making speeches about trees to chopping them down.

Both Shapiro and Gonzalez portray their characters from infancy to adulthood, achieving subtle yet swift transformations in the changing ages of their respective Charleses. The chemistry between Toth and Shapiro is especially magnetic, as the heartwarming pair recalls every father-son duo who has expressed their love in awkward, mostly non-verbal ways.

The three generations of Charleses evolve and diverge down their own paths, their differences made distinct because of their similarities: the virile old man on the decline lives in nostalgia and the comfort of his habits; the young man desperate to find his own footing in the world grows distant from his family; the middle-aged Charles mediates between his father and his son, gradually losing both. Director Meghan Finn does a great job visualizing the passage of time on stage, until we see Charles III, now older and disillusioned, return to his childhood home, and to the sandwich shop where his father once taught him to put ham and turkey in a sandwich, with mustard, oh and chips too.

Up until this point, Charleses has been a feel-good yet enlightening tale about the transient and cyclical nature of life.  But as another small universe forms around the sandwich shop, we see the now old Charles III running the place, holding onto an entire lineage of Charleses with that sandwich recipe, which he eventually passes on to a stranger—a little boy also named Charles. As Charleses pushes the discussion of legacies and lineages further, it adds more flavor and edge to what is otherwise (the name repetition aside) a mostly realistic play. However, at a certain point it's almost as if a Richard Linklater film abruptly turns into a Black Mirror episode—the play loses its grounded focus and unfortunately becomes a bit confusing. Several false endings and an extended epilogue seem to be repetitions of the same point.

Charleses is nevertheless engaging and wildly imaginative. It uses recognizable characters to tell a powerful story in cerebral and inventive ways. And with its heart rooted in a deeply personal place, Charleses' message is at once alarming and touching.

(Charleses plays at The Brick, 575 Metropolitan Avenue, through April 29, 2017. The running time is 1 hour 30 minutes with no intermission. Performances are Mondays and Wednesdays through Saturdays at 8; and Sundays at 3 and 8. Saturday April 29 is at 3, not 8. Tickets are $25 ($35 premium, $15 student/senior) and are available at thetanknyc.org.)

The cast is Richard Toth, Mike Shapiro, and Fernando Gonzalez.