Book by Joe Masteroff; Music by John Kander and Lyrics by Fred Ebb
Directed by Hunter Bird and Chloe Treat 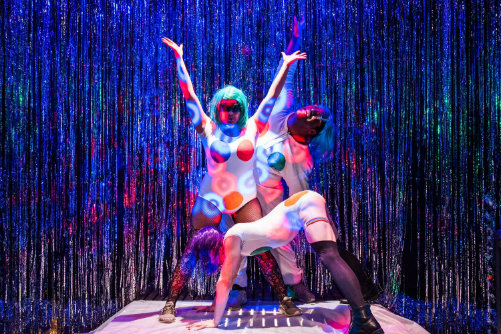 Larry Owens and ensemble in Cabaret. Photo by Reiko Yanagi.

BOTTOM LINE: This new production of the classic musical Cabaret is well sung and acted, but the tone and concept often veer off course.

It’s unfortunate that so many of the themes in Cabaret (set in 1931 Berlin) are relevant in 2017, but the time is certainly right for a revival. The Secret Theatre’s production is intimate, with the grimy Kit Kat Club all around you in the small space, and dancers and musicians possibly right beside you. The storyline is eerily prescient, with deeply divided political parties and a fascist leader coloring the proceedings.

Larry Owens leads a diverse cast as the Emcee, with a fantastic voice and wonderful stage presence. Jesse Weil costars as Clifford Bradshaw, a novelist from Harrisburg, Pennsylvania who is traveling through Europe for inspiration as he writes his novel. On the train he meets Berliner Ernst Ludwig (a very good Jeff Hathcoat), who directs him to the boarding house of Fraulein Schneider (Sue Lynn Yu) in the Nollendorfplatz. A night at the Kit Kat Club introduces him to “the toast of Mayfair,” British cabaret singer Sally Bowles (Natalie Walker).

Despite fighting off an illness at the performance I saw, Walker is a strong, exciting presence as Sally. Her Wednesday Addams-esque characterization separates her from other Sallys I’ve seen, and she brings the right amount of humor, pathos, delusion, and vulnerability to the role (I imagine in perfect health she’s even better). Her performance anchors the production, and is nicely complemented by Jesse Weil’s neurotic but compassionate Cliff. Walker and Weil also, notably, have great chemistry.

The small space is well designed by Justin and Christopher Swader, with lighting by Paul T. Kennedy and costumes by Antonio Consuegra, which really give the feel of a seedy nightclub. Led by music director Dan Garmon, the small band does justice to the iconic songs. However, the ensemble of Kit Kat Girls, though very talented, is used excessively and often distracts from the lead performances. The Emcee often goes past camp (for a example, wearing a pineapple costume during “It Couldn’t Please Me More”), which pulled me out of the production. In addition, some other scenes seem to copy the staging directly from the recent Broadway revival.

Written as a concept musical, Cabaret is abstract and universal all at once; the beautiful writing holds up after many years. That said, this production unfortunately tries to contemporize the show in ways that are unnecessary (e.g., water guns and RuPaul jokes). Adding contemporary touches and a variety of concepts on top of this material only detracts from its deeply moving story. The second act in particular calls for a production to trust the writing; this one veers further off course. I understand the need for added levity during these political times, but with Cabaret, less is more.

Cabaret is by Joe Masteroff, John Kander, and Fred Ebb, based on a play by John Van Druten and stories by Christopher Isherwood. Directed by Hunter Bird and Chloe Treat. Choreography is by Chloe Treat. Set Design is by Justin and Christopher Swader. Lighting Design is by Paul T. Kennedy. Costume Design is by Antonio Consuegra.  Music Director is Dan Garmon. Production Stage Manager is Michael J. Tosto.