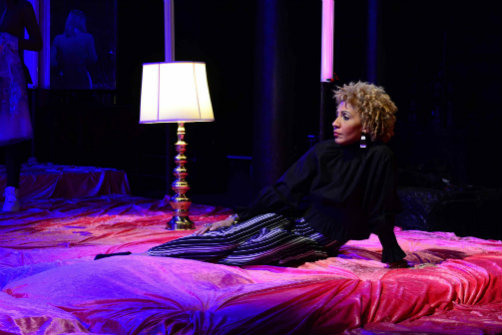 BOTTOM LINE: An exuberant staging of Rainer Werner Fassbinder’s classic that aims to comment on, and subvert, the film.

The world of Petra von Kant, a successful 35-year-old designer of high fashion couture, is best described as saturated, at least in this version created by director Benjamin Viertel. The story of the protagonist’s desire, as well as the tug of war between the central characters, is on full display. And it's under close scrutiny within the confines of Petra’s room: a bed extended into the infinite, an endless extension of pink, with a texture that looks as if velvet or satin—an image of decadence, or a glorified entrapment.

Fassbinder's plot is rather formulaic but features strong female characters: Petra (Caroline Gombé) has a regal air that fits her status as haute couture wunderkind. A divorcee by her own decree, she talks of liberty and living her life unapologetically. Marlene (Alex Spieth), a submissive assistant, serves at the beck and call of "queen" Petra as if a natural instinct. The archetypical master-servant relationship between Petra and Marlene is a fascinating co-dependence, only to be disturbed by the sudden arrival of one Karin Thimm (Betsy Brown), a beautiful 23-year-old who caches Petra’s attention and ignites her desire.

Karin soon assumes center stage and holds the upper hand in this rapid relationship development, becoming the insatiable consumer of Petra’s devotion. The beautiful stranger rises to be a star, and just like Eve Harrington to Petra’s Margo Channing, Karin proves to be a toxic influence for Petra, and leaves the heartbroken patroness to her own devices. Petra drops into an inebriated hysteria which culminates on her birthday, when she awaits Karin’s call in despair while damaging her relationship with her friends and family.

Through it all, Marlene the assistant is the silent observer. Performed with mastery by Spieth, she becomes the connection between the audience and the characters, the reality and the imaginary. Spieth’s Marlene is a joy to watch, with her nuanced yet ever-so-accurate choices activating each reaction to the environment of the play. Marlene’s Brechtian address to the audience is also one of the unique things about this production, and what differentiates it from the film. The new fifth act in this version, which includes a song by Olivia Harris, blurs the line between the reality of the play and the reality we live in, as a final question on whether women can escape the roles assigned to them by the societal machine.

If you’re looking for a remake of Fassbinder’s film that’s faithful to its original style, this might not be for you. The 1972 film has a quiet and calculated elegance, as well as a breathtaking intimacy achieved by layered structures, sparse dialogue, and stillness. Third Space's production is exuberant and deliberately over the top by comparison. While the movie focuses on the romance, this version focuses on the protagonist's imprisonment in a world she is supposedly thriving in. The fate of Petra, the unapologetic, unyielding haute couture royalty, remains questionable, as this strong female character apparently becomes punished by going after her own desire, while her counterpart Sidonie (Mariana Parma) is commended by catering to the male point of view.

The film's enigmatic ending, where Marlene packs her belongings and leaves her keeper, is a powerful statement about the assistant’s eventual freedom. This forlorn yet exhilarating ending is not a part of this production. Third Space has surely created something that will stir up conversation and force the audience to leave with lingering questions. It’s a disturbing story that encourages discussion on gender roles and reflects a lot of our society’s dormant issues.

(The Bitter Tears of Petra von Kant plays at the New Ohio Theatre, 145 Christopher Street, through March 11, 2017. Running time is 1 hour 30 minutes, no intermission. Performances are Thursdays through Saturdays at 8; additional performances Wed 3/1 at 8, Mon 3/6 at 8, and Sat 3/11 at 2. Tickets are $25 and can be purchased through newohiotheatre.org. For more information go to thirdspacetheater.org.)