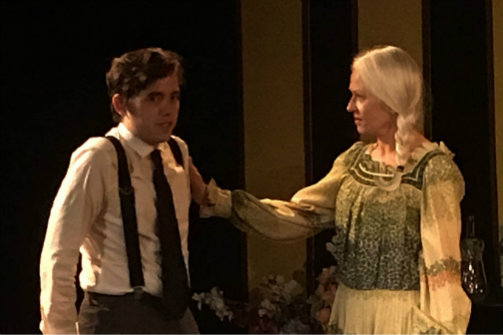 Vicki Lynn Mooney, member of the Cherokee Nation and native of Tulsa, OK, has been writing about indigenous people for over 30 years. In Blood Boundary, Mooney explores the impact of the Dawes Severalty Act of 1887 on a mixed-race family in 1920s Oklahoma. The Dawes Act, signed by President Cleveland, split up communally-held reservations and divided them into smaller units. This law reduced Native American landholdings from 138 million acres in 1887 to 78 million by 1900. In 1921, Tulsa became ground zero for racial unrest, with the Greenwood Massacre (formerly known as the Tulsa Race Riots), in which Greenwood, at the time the wealthiest black community in the country, was destroyed, and more than 300 people killed.

In Blood Boundary, Mooney drops James (James Denzer), an aspiring doctor, and his extended family into this maelstrom. James is part Native American, but passes as white, having been raised by a grandmother who forbade Cherokee to be spoken in the house. Summoned home to see his mother on her deathbed, James must decide what to do about her land allotment, which includes multiple properties in what has become the black part of town. Wrapped pretty tight, he also wants to keep the truth about himself from getting out. As secrets about his identity are revealed, this adds to his growing conflict about what he’s been hiding.

James also must contend with the sudden appearance of his mother’s half-brother Billy (Tony White). Billy, a railroad porter, has started to see flashes of white resentment over his good job. Billy and his daughter Tassie (Pamela Joy), who is sweet-natured but no shrinking violet, are also mixed race. After James’s mother dies, Billy is given the house that James had been raised in. Billy and Tassie plan to lovingly transform it into a hotel for black travelers. Yet James's volatile cousin Virgil (Neil Brown), a Klan member in the making, believes he’s entitled to the property and becomes the catalyst for what unfolds. Trying to bring some calm to the unrest is James’s kind and proper Aunt Jane (Joan D. Saunders) and the breezy Fain Cuddahy (Jill Cook), Virgil’s grandmother, who has come east from San Francisco for the first time in decades.

If you’ve kept track of all these different threads, then you are doing better than me. Mooney has created an absorbing family drama set against the backdrop of violent racial strife, but her plot is overstuffed. There’s even a prostitution subplot involving Fain and the other late grandfather, which feels rushed and unnecessary, given how much else is going on. Given the abundance of characters both onstage and off, like the two grandfathers, Jane’s sisters, and James’s father, a family tree in the program would have been really helpful.

The performances are mixed, with certain actors coming across as less polished. The show hangs on James, a character who’s forced to live a pretense and keep his true feelings locked away, which makes for a tricky protagonist. James Denzer is affecting in conveying James’s anxiety but there are moments when the writing requires major emotional outbursts, and Denzer falls short. Neil Brown makes a compelling villain and brings nuance to Virgil, who is more than a stereotype. Tony White, who also directs the production, has a dynamic stage presence as Billy, and the regal Joan D. Saunders lends a note of grace as Aunt Jane.

My other main criticism is that the many set changes are disruptive and slow down the action. There are too many instances of a crew member coming out to move furniture and props, rather than having the cast do these changes (or reduce them altogether). This problem is exacerbated by the lack of any sound design during the changes; perhaps period music, rather than just dead air, might help the play resonate more.

Although this is an imperfect production, it’s an engrossing story. And given how, at least in New York, so few plays are produced that focus on indigenous peoples, let alone ones written by a female Native American playwright, Blood Boundary should be seen. The themes of racial inequality and violence against people of color are unfortunately as timely as ever.