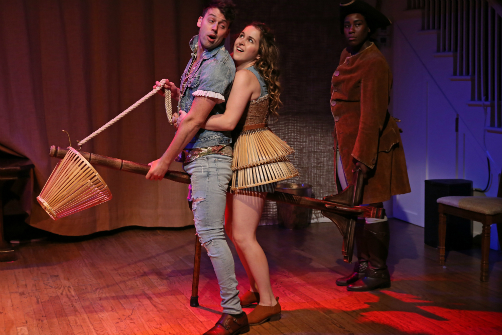 BOTTOM LINE: The charming bastard Tom Jones has sex all over Britain while following his love, the Reverend's daughter, in this new rock musical. Full of sexual innuendos, talented singers, and debauchery, Bastard Jones is a heck of a good time.

There is a lot to love about Marc Acito and Amy Engelhardt's Bastard Jones, based on Henry Fielding's 18th-century classic The History of Tom Jones: A Foundling. With the lead actor playing Tom Jones having lost a leg to cancer and an actress in the cast being legally blind, the idea of accepting oneself is not just talked about in the show; it's a message that director Marc Acito really takes to heart. They don't stop there, though: 100% of the production’s proceeds will benefit Cyndi Lauper’s True Colors Fund to help homeless LGBT youth.

Bastard Jones is the story of Tom Jones (Evan Ruggiero), a young man who, as you probably surmised from the show title, was born out of wedlock. He doesn't know who his mom or dad are, but he does know that he owes his life to the kind Squire Allworthy (Tony Perry), who has raised him. Local clergyman Reverend Shepherd (Adam B. Shapiro) has it out for Tom, though if he only paid attention he would see that his lovely daughter Sophia (Elena Wang) is smitten with the young man. But Tom does not just have the unfortunate circumstance of his birth to worry about: he also has a healthy sexual appetite, which gets him into trouble, and into Molly (Alie B. Gorrie), causing problems for his relationship with Sophia now that she has returned from finishing school.

At the same time that Sophia is discovering her feelings for Tom, her father is making plans to arrange a marriage for her. Allworthy's sister Bridget (Cheryl Stern) has a son, Mr. Blifil (Matthew McGloin), whom the Reverend decides would be a good match. Tom is banished, Sophia runs away, Partridge (Rene Ruiz) enters the plot, and that is when all of the fun really begins. Sex, fights, sex, singing, oral sex, doors slamming, a bit more sex, people screaming, simulated sex, and a masquerade all take place before the end the show as Tom tries to keep his promise to the squire that he will control his wild self.

Not all the show's songs are equal. Don't get me wrong, the singers are fantastic (though one or two got a bit pitchy at times), but not every number can be a winner. Luckily this talented group knows how to act through their singing, which was a nice surprise, especially when the beginning of the play had me quite worried. It felt like everyone was trying to be funny rather than trusting in the words. But about halfway through the first act, the show turns itself around. As soon as the characters venture out of their little town of Somersetshire, the action starts to fly. There is a lovely ballad between Ruggiero and Wang, and “Born to Be Hanged” is quite catchy, but my favorite song (by far) is “Nil Desperandum.” The title means “never despair,” and it becomes a motto and a lively number along the lines of The Lion King's “Hakuna Matata.”

I was torn whether or not to discuss further the fact that leading man Evan Ruggiero has only one leg, but  I made the choice to write about it because the show integrates his peg leg into many scenes in the most wonderful ways. He uses it as a weapon while fighting, and as an instrument while drumming on the table, floor, and wall. It comes into play to contribute to comedic bits as well. It isn't just something to ignore, it is a part of him and helps put him into the triple threat category.

All of the actors bring their delightful characters to life, but Crystal Lucas-Perry and Matthew McGloin stand out. Perhaps it's the sheer number of characters each of them plays, or perhaps the extreme differences of each of those characters, but their depth of commitment never wavers. The two of them have an extremely memorable number when the audience meets Lucas-Perry as Lady Bellaston. She dazzles the audience with her poise, vocal cords, and comedic timing while McGloin entertains as Lord Fellamar, Lady Bellaston's subservient sexual plaything.

If you haven't been reading up until now and just tuned in, this is not a show for kids. It has lots and lots of sex jokes, simulated sex, and talk of sex. But if you are an adult and like entertaining songs, talented actors, a decent love story, funny jokes, and some plot twists, this a wonderful way to spend an evening.

Bastard Jones is by Marc Acito (Book & Lyrics) and Amy Engelhardt (Music & Lyrics), based on a book by Henry Fielding. Directed by Marc Acito. Choreography is by Joe Barros. Lighting Design is by Gertjan Houben. Sound Design is by M. Florian Staab. Costume Design is by Siena Zoe Allen. Musical Director is Matthew Liu. Orchestrations are by Bob Malone. Stage Manager is Louisa Pough.