By Charles Ludlam; Directed by Everett Quinton
Produced by Theater Breaking Through Barriers 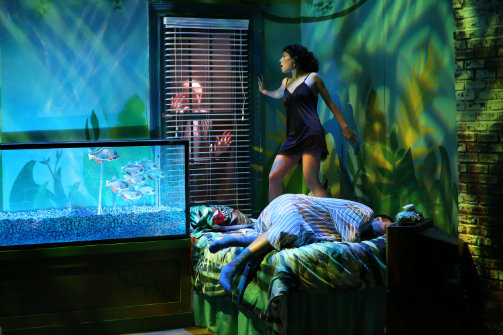 BOTTOM LINE: The hilarious, campy style of Charles Ludlam and the Ridiculous Theatrical Company lives on, in this excellent revival.

Charles Ludlam was one of the few downtown theatre artists of the ‘60s, '70s, and '80s whose name branded his very own aesthetic. He called his company, now celebrating its 50-year anniversary with this production, the Ridiculous Theatrical Company, which says it all. Ludlam indulged in the delights of camp without apology. He was an actor, director, producer, designer, and playwright who left us 29 plays when he died of AIDS in 1987. Two of his plays, The Mystery of Irma Vep and The Artificial Jungle, have enjoyed significant productions since then. The latter is currently being revived by Theater Breaking Through Barriers under the direction of Ludlam’s former companion, Everett Quinton.

The play feels like a stage version of a B-movie thriller that flaunts and celebrates its own phoniness. Imagine actors in a murder mystery mugging in a close-up when a major clue or twist is uncovered. Now replace the close-up with an abrupt lighting cue and a dramatic pose, and you begin to see how the same effect is created on stage.

The Artificial Jungle takes place in a mom and pop pet store run by Chester Nurdiger (David Harrell), his mother (Anita Hollander), and Chester’s wife, Roxanne (Alyssa H. Chase). Like Willy Loman, Chester’s status is imbedded in his name. Though he is sweet and unassuming, he is happy to sell you a parrot by using his gift for ventriloquism to make you think it can talk. Aside from this minor character flaw, Chester is such an innocent momma’s boy that you just want to kill him. So when Zachary Slade (Anthony Michael Lopez) shows up looking for a job and falls for Roxanne, the two start scheming grizzly ways of offing Chester and taking over the store. But will they get away with it?—cue music and abrupt light change as the actor stares at the audience with eyes and mouth wide open.

This is Little Shop of Horrors, with murder motivated by mundane human unhappiness instead of greed and a man-eating plant. The comedy and delight is derived from its artifice. The central image of Bert Scott’s colorful and expensive set design is a fish tank filled with piranhas. Why would a prospective pet owner want to buy a piranha? Exactly, it’s ridiculous. The carnivorous fish are included just to induce more terror and danger. Thanks to the excellent puppet design by Vandy Wood and Satoshi Haga’s convincing manipulation, the piranhas are just as present and involved as the actors.

I’m so glad Theater Breaking Through Barriers is still reviving the work of Charles Ludlam 30 years after his death. And Mr. Quinton’s involvement lends credibility to this production and perhaps the faith that Ludlam would have been happy with this incarnation had he been here to see it. The play and production, like Ludlam, is indeed ridiculous, so if you’re looking for sincere, heartfelt fare, this is not it. But if you’re looking to celebrate the artificial limitations of theatre, and laugh at the ridiculousness of stock characters, a fabricated plot, and phony-baloney horror, The Artificial Jungle will make you smile. I can’t think of a better way to honor Ludlam’s memory.

(The Artificial Jungle plays at Theatre Row's Clurman Theatre, 410 West 42nd Street, through July 1, 2017. The running time is 1 hour 40 minutes with an intermission. Performances are Tuesdays  and Wednesdays at 7; Thursdays and Fridays at 8; Saturdays at 3 and 8; and Sundays at 3. Tickets are $52.25 and are available at telecharge.com or by calling 212-239-6200. For more information visit tbtb.org.)