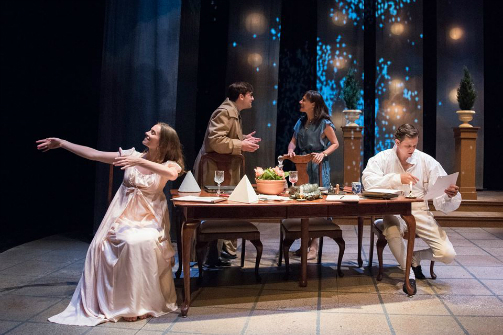 Tom Stoppard’s incredibly multilayered 1993 play Arcadia (the title comes from Et in Arcadia Ego, which means death is inevitable even in Arcadia/paradise), is much like the rose on its cover: there are tongue-in-cheek witticisms about sex hidden in literary references and talk of landscape gardening and algebra. Arcadia is a perfect organism with equal part art and science, perfumed with the eloquent language of the Romantics and the accurate one of mathematicians. There isn’t a single redundant detail; every word, however trivial, functions as a crucial gear in this elaborately wound up machine of a play. It’s one of those theatrical experiences that you can’t  enjoy partially or out of context—it requires your undivided attention, for the play is like a Fibonacci spiral that keeps unwinding to reveal more secrets and surprises at every turn. Each time I re-read the play, or see a different production, I discover something new.

It's difficult to conceive of a unique take on staging, since Arcadia takes place entirely in the study room of the Coverlys, a family of aristocrats in Sidley Park, Derbyshire, England. More specifically, it is set at a large table, in two time periods. In one, the prodigious 13-year-old Thomasina (Caitlin Duffy's performance make the vivacious youth instantly likable) takes lessons from her tutor Septimus Hodge (Lord Byron's contemporary and school friend at Trinity, played by Andrew William Smith). And then almost 200 years later, Valentine Coverly (Jackson Prince brings out a nervous and vulnerable energy to the part that makes him stand out) plots the graphics of grouse population on his Macbook. The two parallel storylines share not only space, but also relationships between characters.

“What is carnal embrace?” asks Thomasina. That’s the very first thing you hear out of this seemingly pastoral setting of a period piece. And there you have it, the intellectually charged yet humorous tone of the play unfolds atop the desk where early 19th-century manuscripts and late 20th-century technologies coexist, along with some constants: the designs of Mr. Noakes (Sebastian LaPointe plays the delightfully oblivious gardener), the poems of Lord Byron, and a pet tortoise (Plautus then, and Lightening now).

Arcadia is very much about the process of solving mysteries, a play in which we discover, despite the ignorance of the characters, the inner works of destiny and the tricks time play on scholars and romantics alike. There’s a murder mystery (almost), a whole “who done it” plot, with clues and traces of evidence like a set of jigsaw puzzles. The 19th-century storyline starts right before Lord Byron (an unseen guest at the house) sets off at Falmouth on his two-year voyage around Europe. Lady Croom (Megan Bryne holds her status as the head of the household with ease) takes pride in her garden and commissions a landscape gardener to redesign the estate, a process to be preserved in the latter’s detailed sketch book. Meanwhile, the family tutor becomes rather popular with the ladies, which stirs up scandals left and right, and makes him the target of a duel.

Fast forward to the 20th century, where Bernard Nightingale (Alex Draper) calls on the Coverly house to seek help from Hannah Jarvis (Stephanie Janssen), whose book on Caroline Lamb’s garden he had just ridiculed. Nightingale, an expert on Byron, is chasing after a new lead found in the dedication line of a two-bit poem by Mr. Chater (Jonathan Tindle), because he believed that Byron had killed Chater in a duel. With the famous poet’s libertine reputation, this assumption is not far-fetched. The scholarly debate escalates as the audience witnesses both sides of the story.

The play boasts a phenomenal number of complex ideas, but ultimately, it boils down to the constant question of what makes us matter. The tutor who ends up a hermit, the young girl who never gets to fulfill what she’s capable of, the mysteries of ordinary life, after all, are all part of the never-ending march of human nature. “We shed as we pick up,” says Septimus after Thomasina mourns the loss of the great library of Alexandria. Life is short, but nothing is ever truly lost, for everything comes back, like the iterated algorithm that squares back to sense.

Potomac does a fantastic job preserving the essence of the play and keeping the simplicity of the staging, lest overdesign distract from the power of the text. And while I never made much of it before, Potomac’s production also highlights the complexity of the female characters in this play. The powerful presence of women in both timelines makes Arcadia a compassionate, timely warning against misogyny. In the program there is also a glossary of concepts, including Fermat’s last theorem, the second law of thermodynamics, and chaos theory. Certainly Arcadia never sets out to be easy entertainment—it demands curiosity and attention to detail. But the result is a life-altering one.

Arcadia is by Tom Stoppard. Directed by Cheryl Faraone. Scenic Design is by Mark Evancho, Lighting Design is by Hallie Zieselman, Sound Design is by Cormac Bluestone, Costume Design is by Mira Veikley. Production Stage Manager is Elizabeth Goodman.