By Alexandra Tatarsky; co-Directed by Meryl Sands
Part of the This is Not Normal Festival

Off Off Broadway, Solo Show
Ran through 6.29.17
The Brick, 579 Metropolitan Avenue 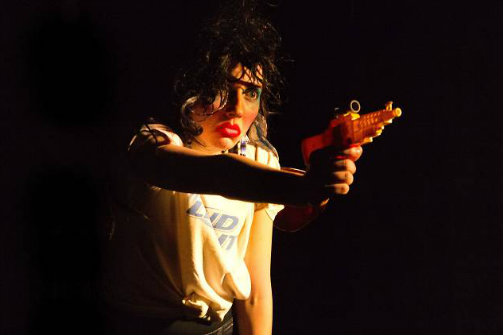 Do you feel angry, devastated, or scared after the 2016 presidential election? Maybe you should consider the Laughter-Tears-Vomit-Scream exercise brought to us by Laughter Yoga. This and other ways to cope with reality are demonstrated by Alexandra Tatarsky in her solo show Americana Psychobabble, which ran at The Brick as a part of This is Not Normal, an arts and activism festival.

When the political life of the country looks like an absurd circus, it is only appropriate for the clown to speak up. Tatarsky bravely assumes the responsibility for voicing global anxiety. From the very beginning she radiates a great amount of explosive energy, visible through the twists and twitches of her athletic body and rapidly changing raw emotions. Seductive, melodramatic, enraged, scared, and inspiring, Tatarsky switches emotional gears in a heartbeat.

When Tatarsky opens her mouth, words come out. But for the most part it’s just a stream of consciousness similar to Russian futurist “zaum” poetry. It sounds something like this: “Fuck the facts. We are so post-fact. De facto. That we are all fucked.” Talking in this manner, Tatarsky “reflects” on topical American issues: patriotism, money, guns, immigrants, and God. Think crazy preacher on the subway, or “village idiot” of the Lower East Side.

Strangely, this manner of speech feels suitable for modern day America. Words put together by the principle of audible similarity and infused by emotional delivery and expressive body language suddenly become a convincing monologue. When Tatarsky climbs up on an upside-down soybean oil container to deliver an inspiring patriotic speech, it is not merely a satire on Trump’s America. It is also a cry for help, a weep of a confused creature tangled in words and emotions.

Tatarsky's star-spangled outfit, red stilettos, ragged blond wig, and heavy, smeared makeup of “a patriotic lady coming home from Fourth of July festivities” are tossed away for the second part of the show. A brief interactive session of Laughter Yoga is followed by pouring ketchup on her finger and pretending it’s a hot dog. The Angel of Death—in platform sneakers, tangled black wig and a bundle of ferry wings dangling behind her back—takes the stage with a touching ballad accompanied on acoustic guitar.

Heartfelt songs with lines like “Daddy will make you feel great again” and “Music is made for being sad and making sadness loud,” feel very much on point. The more sentimental second part of the show abandons the “zaum” manner of speech and serves as a counterweight to the absurdist poetic beginning. To free herself from all the masks that a clown wears, Tatarsky performs a cleansing ritual of washing off ketchup from plastic bags and then bathing her face in the ketchup dyed water. And as Tatarsky strips out of her clothes when changing characters, she leaves the stuff on the floor like a snake discarding her skin.

In Americana Psychobabble, Tatarsky is the jester, the villain, the imprisoned princess, and the knight on a rescue mission. Frightening and frightened, she somehow embodies both ends of the political spectrum making us understand a simple thing: there is no “us” and “them.”

(Americana Psychobabble played at The Brick, 579 Metropolitan Ave, Brooklyn, through June 29, 2017. The running time is 60 minutes with no intermission. Tickets were $20. For more information visit bricktheater.com.)

Americana Psychobabble is created and performed by Alexandra Tatarsky. It is co-directed by Meryl Sands. Lighting Design is by Sarah Murphy.