By Antonio Ramos and the Gang Bangers

Off Off Broadway, Dance/Experimental
Runs through 9.30.17
Dixon Place, 161A Chrystie Street 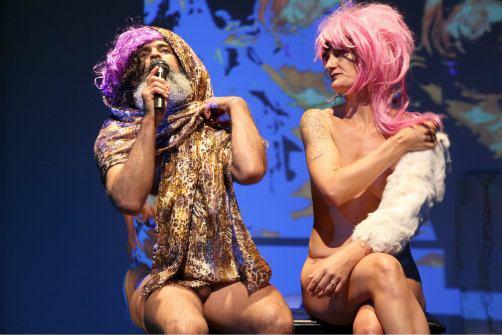 Fans of Pedro Almodóvar’s films likely love the heightened emotion, the melodrama, the irreverent humor, and the sheer craziness that often ensues. Even in his darkest films, there is always a nod to the ridiculous. Almodóvar Dystopia distills Almodóvar’s spirit down to its essence, in the process getting rid of any vestige of narrative or character. Well, except for “Santa Judy.” It’s pure, unadulterated (albeit very adult) insanity.

Like a lot of downtown theatre, Almodóvar Dystopia is described in somewhat fancy language—ringleader and choreographer Antonio Ramos is said to explore “themes related to gender diversity and “sub-class” conflicts.” And while all of this is totally there if you look, I’ve found the best advice for experimental theatre is simply to sit back and let everything wash over you. There will surely be moments where you think “what in the hell is going on?” At other moments, the boredom may start creeping in. But if the company has done their job right, there will be at least a few moments of brilliance that make the whole thing worth it.

Ramos and his Gang Bangers have definitely done their job right here. The whole experience of Almodóvar Dystopia is best described as a series of vignettes that fluidly move from one to the next. For the choreo fans, there are several extended dance sequences, one that feels very contemporary and free-form (I wrote “horse stomping” in my notes) and another that’s much more balletic, with lunges, extensions, and turns. Everyone is naked during the dances, although everyone is pretty much naked throughout the entire show (even the tech guys). But with the help of Claire Fleury’s revealing costumes, these sequences are far more artistic than they are prurient.

But while Ramos and his crew come from a dance background, this isn’t just a dance show. There are several scenes—almost entirely in Spanish—that, as far as I could tell, pay homage to, or are inspired by, Almodóvar’s films. But although my Spanish isn’t the best (and there are no supertitles—that’s for amateurs), I never really felt left out. At one point, it was clear we were supposed to “clap for placenta” (although I have no idea why). And when the company begins orgasmically worshipping a large photo of Judy Garland, the campiness of the moment transcends language.

Video is another big element in this show. Projections are used throughout, and often the effect is kaleidoscopic, more of an illustrative backdrop than anything figurative. But the company also makes good use of their green screen, most notably in two segments. In one, Ramos gets down on all fours and laboriously pulls items from offstage—a beach ball, a cardboard martini glass, an ironing board. But with the repetition of images enabled through Alex Romania’s video design, it appears as if Ramos is pulling the items out of his own ass. It’s all incredibly simple and juvenile, which makes it all the more hilarious. Then, near the end, there is another moment of “video butt play,” which results in a rather unique song-filled sunset. If only every nuclear holocaust could be like this!

And then there’s the chocolate—midway through the performance, the company takes a break to serve the audience a small snack courtesy of Dame Cuchi, while Luke Miller explains (in English) what’s going on. I hesitate to say much more, because much of the fun here is in the surprise. I will say that the chocolates are very good (there’s a vegan option) and these are, without a doubt, the most memorable chocolates I have ever had the pleasure to consume.

Almodóvar Dystopia is certainly not for everyone. Aside from the extensive nudity and sexual explicitness, those unused to downtown and experimental performance may leave more confused, or even irritated, than fulfilled. And the title aside, the only explicitly recognizable bits of Almodóvar films occur during the pre-show, when Ramos plays trailers of Volver and Kika. So if you’re looking for some kind of Almodóvar bio-play, this is definitely not that show. Still, if you don’t mind feeling at sea for stretches of time, Almodóvar Dystopia is an incredibly delectable bit of insanity. Eat up!

(Almodóvar Dystopia plays at Dixon Place, 161A Chrystie Street, through September 30, 2017. Running time is 75 minutes, no intermission. Performances are Fridays and Saturdays at 7:30. Tickets are $21 in advance, $24 at the door; $18 students/seniors/ID NYC. For more information visit dixonplace.org.)