By Matthew Spangler and Benjamin Evett; Directed by Rick Lombardo
Produced by The Poets' Theatre 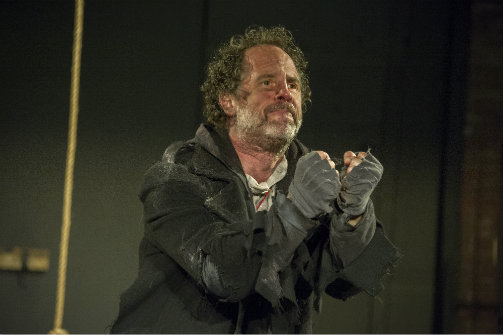 Benjamin Evett in Albatross. Photo by

BOTTOM LINE: Inspired by Coleridge’s "The Rime of the Ancient Mariner," Albatross is a timeless tale about compassion, regret, and salvation.

A mariner (Benjamin Evett) stumbles onto stage, his presence like an apparition, interrupting the silence of a dilapidated set. A trunk that seems to have weathered the storms by his side, he jolts up in the electric light, and as if driven by an unseen force, words start to spill out of his mouth. As the Mariner introduces himself and his storytelling mission (along with dissing Coleridge for getting the facts mixed up) he sets up the physical backdrop for his tale. From the old trunk the foul-mouthed seaman drags out sheets of patched-together fabrics, each one stained with what seems to be centuries of memories. The sheets are stretched to become the sails of a grotesque ship onto which the inner works of the sailor’s past are laid bare to the audience.

His tale starts out as a simple, all too familiar story: a drunken mariner sets out to sea, leaving his wife and sick child behind with a vague prospect of fortune and glory. Evett’s Mariner is passionate, rowdy, and ill-tempered; his physique is wildly animated, with the level of energy of an oncoming storm. The Mariner, having been shanghaied onto the ship, is now on a voyage towards South America. The ship crosses the equator and rapes an uncharted island of its residents: penguins and a warrah (Falkland Islands wolf, now extinct). It’s the 18th century, of course, when neither animal rights nor environmental activism are on anyone's minds. The smooth sailing, however, doesn’t last long. The ship soon reaches the icecaps of Antarctica, and amidst the frigid cold and eternal unforgiving winter, men are lost to the elements.

When Evett’s Mariner introduces the mystical albatross for the very first time, the solemnity, and almost ceremonious stillness, makes the moment breathtaking. The albatross, as the Mariner describes, is a fascinating creature that mates for life and creates a dance that’s unique to their decided lifetime companionship. The albatross doesn’t age and glides through the air without rest, sometimes for five years. Sailors of the wind they are, says the Mariner. The lonesome Mariner soon finds a strange and indescribable connection with the albatross, before, in a moment of vengeance without a reason, he strikes the bird down with an arrow. The manifestation of evil is really just violence without a conscience.

The rest of the story is fable-like. The Mariner is henceforth cursed because of his act of violence against the innocent albatross: the spirit of the Antarctic thrusts death upon the Mariner’s shipmates, and eternal damnation upon the Mariner. He is deprived of water and food yet, despite his agony, he cannot die until finally he reaches ashore once again, back home in Bristol, England. And thus the Mariner becomes the spirit of his sin, frozen in time and simultaneously traversing generations, telling his story over and over in search of salvation and redemption, both for himself, as well as for other people’s acts of violence against creatures on earth.

At its core, the Mariner’s story is a cautionary tale. Matthew Spangler and Benjamin Evett’s script revives Coleridge's ancient poetry and makes this 18th-century stock character relevant. With humanity’s negative impact on nature and cruelty to animals, the Mariner’s story deserves even more urgent attention. With polar bears facing extinction as their home literally melts away, it is time that we realized the responsibility we hold, and seek solutions before it’s too late. The Mariner has become an echo, a foghorn that spreads the warning, and his story is a desperate call to action: to protect, to save, to become aware, to wake up.

Many kudos should be paid to sound designer Rick Lombardo, who creates excellent soundscapes as well as perfectly timed effects for every single magical moment throughout this entire production. Cristina Todesco’s scenic designs, as well as Frances McSherry’s costumes, also work together cohesively to introduce the contexts of a story that is both ancient and very much current. My one critique concerns the projections, which become more of a distraction than an enhancement. This is partly because the style isn’t quite consistent: a few backgrounds are semi-animated and look like they came out of a video game. While they help the audience understand the information-packed show and make it easier to transition between scenes, the projections also make the show presentation-like, leaving little to the imagination. It is clear that the ingenious lighting designer Garrett Herzig has the capacity to introduce any environment with a flicker of light. With Evett’s already kaleidoscopic movements, the constantly changing background projections seem unnecessary. Yet they ultimately do not prevent The Albatross from being a stirring production centered around a masterful performance.