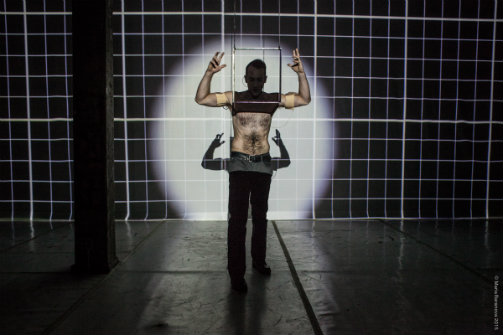 BOTTOM LINE: A moving performance piece which invokes modern technology in an attempt to express what it feels like to be here, now.

Theatre that examines the effect of technology on contemporary culture and the individual can be problematic. For one thing, it requires that some form of technology be evoked in the performance space, and, occasionally, that can seem artificial and heavy-handed. In other instances, the technology can go kaput in the midst of the performance which is a relatable albeit unpredictable phenomenon for a piece that presumably went through many tech rehearsals to avoid such unintentionality. Then you have those performances that put a lot of technology on display but don’t really go beyond the “that was cool” factor. YOUARENOWHERE, devised by and starring Andrew Schneider, is perhaps the best portrayal I have seen of how modern technology is in dialogue with modern human behavior and of what it means to be ambivalent that technology does as much to us as it does for us. Like any magician, in YOUARENOWHERE Schneider unassumingly places a mirror in front of his audience even as he conjures and bends technology to his purposes.

In performance, in meditation, in mindfulness, and in life, we often hear the conventional wisdom of how important it is to be present. Yet how do we accomplish this when our brain is habituated to think in the very linear sequence of past, present, and future? This is not the main question in YOUARENOWHERE, but it gives you a sense of the nature of ideas upon which the narrative is built. Ironically, YOUARENOWHERE, is a journey to somewhere. It is a curated experience devised to invoke self-awareness so that you remain present with what is happening now for Schneider and, by association, for you. I won’t reveal too much about YOUARENOWHERE in the way of plot. It is part of the conceit that you go in knowing very little. This choice enhances the experience and serves as a bit of a critique on expectations, assumptions, behavioral conditioning, perception, identity, and loneliness.

There are some things for which I can prepare you, though. YOUARENOWHERE, is artistically complicated and aesthetically striking. As in life, sounds give way to certain emotions and thoughts. Lighting illuminates as well as casts shadow, depending on one’s position. In particular, the lit frame suspended from the ceiling is a fixture with which Schneider interacts as well as a prop, a tool, and a lens which sometimes illuminates Schneider’s face and sometimes enshrouds and effaces him. In this way, the sound, the lighting, and the set design construct a space where talking, silence, movement, and stillness are significant and noticeable in ways that perhaps you have never noticed before. Indeed, Schneider talks so fast and with such intensity that, more than likely, you won’t be able to always keep up, but that’s okay. That’s part of the performance. The sound cues, too, can be so loud and intense that you may experience some sound waves as physical vibrations that move through your body as well as through your eardrums. Both the sound and lighting changes are sometimes abrupt, at other times overwhelming, and occasionally hilarious. That, too, is the point.

Technological cleverness aside, YOUARENOWHERE, contains moments of astounding and confusing beauty that come from the pace, timing, physicality, expression, and the presence of Schneider as well as other performers. There are few moments I have sat in an audience and felt like I was having a very personal, out-of-body, incomprehensible experience in a public place. It an achievement that Schneider and his creative team are able to invent YOUARENOWHERE not only as a theatre piece but as a place, a space, and an experience that is uncanny.