The Witch of St. Elmora Street 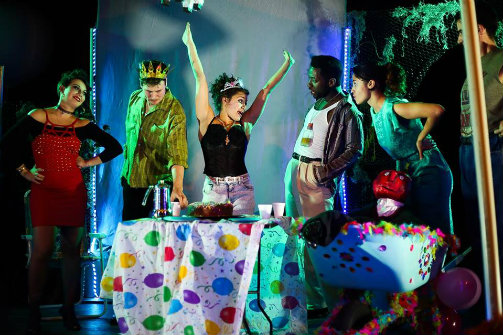 BOTTOM LINE: The Witch of St. Elmora Street is a grotesque comedy about heartbreak and revenge in a Sicilian American family.

As the audience files into the Access Theatre's black box space, it's as if they are transported back in time, and just a little bit west. We peek through chicken wire fence into a typical New Jersey backyard in the 80s, complete with exposed kitchen pipes and a labyrinth of Christmas lights, in a sort of romantic and bizarre, clownish wonderland.

And so it begins: the ghost of the family patriarch, in the form of a giant tomato plant—appropriately named Daddy in the Tomato Plant (Enzo Ferrante)—rises to tell the history of how the family came to live on St. Elmora Street, and introduces the kaleidoscopic personalities of his children. The tides of time have witnessed the birth of subsequent generations after the family’s first rooting in America, as well as the losses they have experienced.

Grazi (Caitlin Zoz) comes out first, with medusa-like hair and a face covered in makeup smudges, and starts to dig into her birthday cake like she’s grabbing a fistful of mud on the beach. It’s soon revealed that the 26-year-old had sought out a fortune teller who sees “blood, blood, blood!” in her future, and that Grazi and her twin brother Micky (Chris Dunlop) are both dealing with being cheated on by their respective partners Vicky (Venessa Koppel) and Mimo (Chinaza Uche). As agitation increases and the characters’ superstitions become increasingly exacerbated, Grazi becomes consumed by the desire for revenge.

Caitlin Zoz embodies the rambunctiously loud Grazi to the nines, as if a fauvist painting had come to life. Chris Dunlop’s Mickey has a pathetic innocence that makes the character magnetically relatable. And the easy chemistry between Adona (Nichole Pursel) and Grazi and Mickey's older brother Tommy (Nathaniel Peart) is another highlight, as their characters connect the rest of the family with voices of sanity.

Playwright Joey Merlo creates a world of cacophony, catalyzed by the characters’ fierce love and emotions toward each other. This is a world of saturated colors and sounds in full volume. Director Emilyn Kowaleski’s interpretation is thorough and nuanced, exploring both the characters’ larger than life ridiculousness and their vulnerability. The design team deserves equal applause: Brooke Van Hensbergen’s hyper-realistic yet magical set, Lizzie Donelan’s costumes, Ali Tritto and Lea Maurer’s particularly impressive hair and makeup, along with Mike Mcgee’s lighting, all help Merlo’s play reach its full potential.

Merlo effortlessly writes extreme scenarios that seem normal in a house of “clowns"; and makes their peculiar ways of communication seem convincing enough that you’d think this could happen in your neighbor’s backyard. The utterly heightened and deliciously ridiculous style of storytelling sets the tone perfectly, like dressing up a deep wound in a fabulous, extravagant costume. With its twists and turns, Merlo's script will surely keep folks on the edge of their seats, eager to figure out whether the mysteries in the focal Sicilian family’s life are caused by wizardry or the trickery of human hearts. The Witch of St. Elmora Street is a comedy that has the power to tear your heart apart before you have a chance to escape its charm.

The Witch of St. Elmora Street plays at Access Theater, 380 Broadway, 4th Floor, through December 18, 2016. Performances are Wednesday through Saturday at 8 and Sunday at 7. Tickets are $25; $45 for premium, and are available at elmorastreet.com. For more information visit DarkMatterNYC.org.)