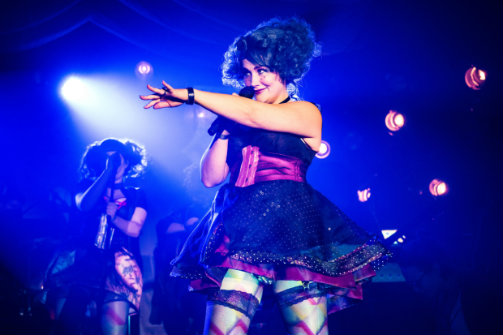 Lauren Worsham in The Wildness. Photo by Ben Arons.

BOTTOM LINE: The Wildness is a damn good time about some of our worst times.

Let’s just get this outta the way: The Wildness is super fun. And you should go. It’s sexy, smart, and honest. The aesthetic is one part steampunk, one part Rose Art unicorns, one part Atari, and one part Studio 54, all mixed up with a whole bunch of sequins, skin, and a bunch of good tunes. Lilli Cooper (of Spring Awakening fame) is truly a gift, and creator/writer/front-person Lauren Worsham rocks the hell out of this new musical. Sky-Pony, Cooper, and Worsham: I’m sold.

Ok, that’s the gushing part. Now onto the story. Every year, a group of friends gather to perform a fairy tale in the woods. It is a ritual of celebration and purging of the old to be replaced with the new. Except this year the group’s leader, Michael, is not there. His sister Lilli (Lilli Cooper) will enact his role, but his absence is palpable. At first, it goes unaddressed. But soon we find that there may be something more ominous happening here that cannot be avoided.

Throughout the story our actors move briefly out of character to “overshare” with us. It’s a ritual of the Wildness to confess your deepest concerns and uncertainties. They seem somewhat scripted but also wholly honest. It seems a healthy way to deal with grief and uncertainty that hangs over The Wildness. We’re asked to repeat “you are not alone” in a kind of AA meeting choral recanting after each one. It’s lovely and entirely sentimental in a way that New Yorkers tend to avoid. And yet a few lucky audience members get to share themselves. In many ways, I longed for my own bacchanal purging in the woods right along with Sky-Pony, so I might confess my own uncertainties about a recent failed relationship and its implications for my ability to love. (Can I get a “you are not alone”?) Such are the kinds of raw feelings that may well up for you in The Wildness.

All this plays out in the beautiful Ars Nova space on Kris Stone's long runway of a set. Director Sam Buntrock keeps us moving through the show with expert pace and precision. Special shout-out to the steampunk/rock concert lighting from Brian Tovar and projection/video design from Alex Basco Koch which serves up 1980s video game realness and uniquely helps us navigate our way through this fairy tale. Tilly Grimes’ costumes are epic and wonderful, suitably fitting each character and serving the world of the play. And amazing props for owning and exploring what it means to be sexy, fabulous, and pregnant. Work!

The crowd I was with on this evening was diverse in age, from teens to seniors. What’s extraordinary was watching everyone with tremendous smiles on their faces as we all collectively celebrated The Wildness. It’s a wonderful theatrical event worth checking out before it ends its limited run. I suspect you will be not alone.

(The Wildness: Sky-Pony’s Rock Fairy Tale is presented at Ars Nova, 511 West 54th Street, through March 26, 2016. The running time is 90 minutes with no intermission. Performances are Mondays through Thursdays at 8, Fridays at 7 and 10, and Saturdays at 8. There are no performances Friday March 18. Tickets are $35, $55 premium. Tickets can be found at arsnovanyc.com or by calling 212-352-3101, and more information can be found at playco.org.)