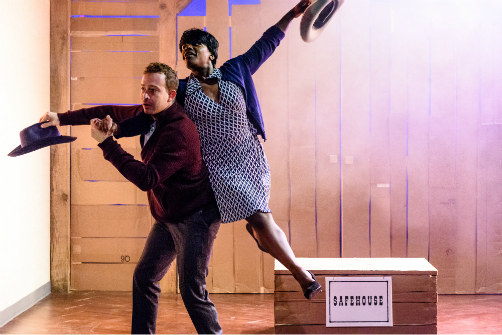 BOTTOM LINE: An "R-rated, kaleidoscopic, and fearless comedy" exploring the tug-of-war in our nation's history on slavery and other racial issues through the scope of a classroom game.

It's a classroom game for fifth graders; it's waltz of sex and violence; it's a challenge extended to the audience to rethink their inheritance of this nation's past. Underground Railroad Game starts in a dimly lit barn, where an encounter between an escaped slave, Caroline (Jennifer Kidwell), and a Quaker abolitionist, Stuart (Scott Sheppard) takes place. After the deliberately melodramatic enactment of the Civil War-era skit is abruptly interrupted with a sharp lighting shift, it is revealed then that the play actually takes place present day at Hanover Middle School. The audience is transformed into the fifth-grade student body, and are split into the two opposing sides of the Civil War to participate in a game of Underground Railroad.

The game, as a matter of fact, is the real life inspiration for the play. The Civil War thematic unit was part of co-creator/performer Scott Sheppard’s own fifth-grade experience, which involved the students’ temporary immersion in what he calls  “a pedagogical extravaganza” as teachers “flexed and strained their creative muscles to get even the lazies and troublemakers excited about learning.” His class was divided into the two warring factions, Confederate Soldiers and Union Soldiers: “We would wage a civil war of learning, rewriting history as we explored it.” Each side would receive points for their military strategy, and one of the key point-scoring exercises was the Underground Railroad Game, in which each side had to either secure or impede the passage of two black dolls through cardboard boxes marked SAFEHOUSE, one in each classroom. According to Sheppard, “Union students would get five points for every new SAFEHOUSE that a doll reached safely, and if a slave made it to every box, he/she became a free person, crossing into a symbolic Canada,” which for Sheppard’s school was the hallway trophy display case.

The play faithfully preserves the real-life elements of the game. As the teachers, Caroline and Stuart, guide their students backwards in time into our nation's most violent hours, their own personal turmoil unfolds. The duo go from awkwardly resisting their sexual desire for each other, to the development of a romance, to a climactic struggle to overpower each other in humiliation and terror. The linear narrative of present day Caroline and Stuart is juxtaposed with the historical subplot, as abolitionist Stuart and slave Caroline abscond to a fictional Canada using the underground railroad system. A third layer of the play is the surrealistic emotional states of present-day Caroline and Stuart. For instance, when they are first developing feelings for each other, the actors break into a dance sequence as time stands still.

The show is billed as an “R-rated, kaleidoscopic, and fearless comedy.” Those five words hit all the marks and there’s really no better way to describe this production. It is indeed a feast of various styles of storytelling, keeping audience members on the edge of their seats as the play snaps between its different aspects like a well-conducted orchestra, all the while challenging you to look into the depth of our nation’s history. The play unloads one surprise after another, like a firework that continuously explodes into different colors and shapes, and pulls its audiences into the fate of the protagonists in a whirlwind of turmoil. Caroline and Stuart, representing their respective races, tackle the baggage inherited from their ancestors. Their multi-layered romantic relationship becomes a metaphor for the turbulent and sometimes misinformed racial relationship in America.

Besides the masterful performances by Kidwell and Sheppard, Steven Dufala creates a suitable set using cardboard pieces to build a reality that’s both imaginary and historical. Oona Curley's lighting design complements the set and transforms the cardboard barn into both the realistic historical space, and the product of schoolroom arts and crafts. Mikaal Sulaiman uses romantic music that borders on cheesy to establish the surreal moments between the protagonists, as the overwhelming, tantalizing, disturbing, almost warlike, and utterly magnetic attraction forms between them.

It takes courage to create a play like Underground Railroad Game. The Inception-like layers of the plot do not sacrifice clarity, as the message of the play is relevant to all. It is anchored at a place of universal understanding, and comes out like wildfire. The play is uniquely American, yet at its core, it is about a tug-of-war between two sides, no matter what cardboard barn we put our dolls in.

(Underground Railroad Game plays at Ars Nova, 511 West 54th Street, through November 11, 2016. The running time is 1 hour 10 minutes without an intermission. Performances are Monday though Wednesday at 7, Thursday through Saturday at 8, and select Saturdays at 3. Tickets are $35 and are available at arsnovanyc.com or by calling 212-352-3101.)

The cast is Jennifer Kidwell and Scott Sheppard.