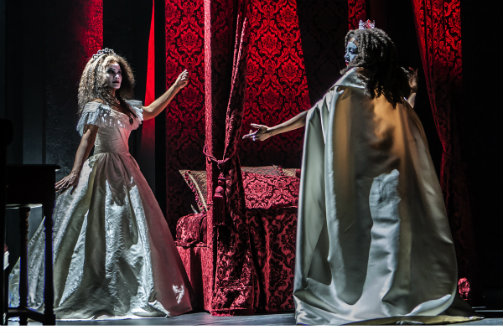 January LaVoy as Duchess of Hapsburg and April Matthis as Queen Victoria Regina in Funnyhouse of a Negro. Photo by Monique Carboni.

Artistic Director James Houghton describes Signature Plays as “three plays that represent Signature’s rich and diverse body of work.” While the choice to remount three short plays from Signature’s past in one evening makes a delightful celebration of Signature’s legacy, I’m curious about his emphasis on Signature’s programming “diversity” through Signature Plays. There actually seems to be more tonal commonalities than differences. Edward Albee’s The Sandbox, María Irene Fornés’ Drowning, and Adrienne Kennedy’s Funnyhouse of a Negro are all firmly rooted in non-naturalistic vocabularies—absurdism and surrealism—and use these forms as portals for social commentary. In addition, director Lila Neugebauer eloquently describes the plays’ main thematic link in her Signature Stories interview: “All of these plays strike me as grappling with the horror and difficulty—and also the beauty—of being bound to a decaying sack of flesh…which is to some extent the human condition, right?” Given these similarities, the evening feels less like a “sampling” of Signature’s diverse history, and more like a flashback to a specific time in Signature’s early seasons…certainly not at all a bad thing, just a different experience than what Houghton describes. That said, the 25th-anniversary celebration does demonstrate how Signature infused more diverse theatrical risks in the early off Broadway scene, paving the way for this wonderful evening of absurdist plays to be accepted and welcome in NYC theatre.

The star of the evening, besides Signature Theatre itself, is director Lila Neugebauer. Any lesser talent may fumble with the three plays’ absurdism, or lose sight of the distinctions between each play’s unique approaches to heighted language. Neugebauer excels in finding relatable ties to unfamiliar worlds, while cultivating unique and jarring movement vocabularies that help us maintain critical distance from the plays and examine their social criticisms. It is her acute dramaturgical eye that ties all three distinct plays together in a cohesive evening of theater.

First is The Sandbox, a hyper-theatrical tragi-comedy about a woman and her husband (played with skilled comedic timing by Alison Fraser and Frank Wood) bringing her mother (played charmingly by Phyllis Somerville) to the beach for her final rest. The unabashedly non-naturalistic set by Mimi Lien immediately sets up Sandbox’s self-aware world: Wings and fly space are exposed around and above the yellow panel and floor representing the beach, matching a play where characters shout instructions to the light board op. The Sandbox is a light way to start the evening and teaches the audience early to let go of any notions of naturalism.

(Stick around for the “nine-minute interlude” between The Sandbox and Drowning for a delightful surprise from actor Nicholas Bruder. It’s both a mini acting master class on being comfortably present in a space, and a brilliant choice to keep the audience engaged in the event during a necessary changeover.)

Next, the curtain rises on Mikéah Ernest Jennings as Pea and Sahr Ngaujah as Roe in Drowning, with bodies and heads “like potatoes.” Pea suffers from unrequited love for a woman who is not disfigured like him. Despite being “made of human flesh,” Pea and Roe struggle with their own humanity when their outward appearance and mannerisms cause other people to reject them. This six-page play takes nearly forty minutes as the characters move and speak like molasses, juxtaposing their minds racing, trying to make peace with rejection.

Finally, Funnyhouse of a Negro takes us through the horrific maze that is Negro-Sarah’s mind (played by a captivating Crystal Dickinson) as she grapples with her internalized racism and self-hatred as a daughter of a black man. While white landlords and lovers observe and laugh, Negro-Sarah examines her parents’ history, her aspirations to be as white as a European royal, and her father’s death and subsequent haunting. Ultimately, her identity crisis makes it impossible to escape the “funnyhouse” in her mind. In addition to its poignant social commentary, Funnyhouse also offers the best showcase of Signature Plays’ design team: Lien’s elegant “Habsburg castle” details (high ceilings, a stunning canopied bed, and a chandelier) don’t mask the “funnyhouse” feeling of the world, with its dramatic angles, surprising passageways, haunting mirrors, dark and shadowy atmosphere (by Mark Barton), and eerie soundscape (by Brandon Wolcott). As the nightmare reaches its climax, costume designer Kaye Voyce outfits the “funnyhouse demons” with headpieces that look like saints’ halos, blurring the lines between the sacred and the profane in Negro-Sarah’s hell, as she loses sight of possible redemption. Ultimately, this gorgeous and spooky world in Negro-Sarah’s mind traps her in an opulent nightmare of epic proportions.

Through the chosen plays’ progressive forms, Signature Plays embraces the writers' freedom to take theatrical risks, a freedom won by the off Broadway theater movement and championed by Signature Theatre for twenty-five seasons. Framed that way, Signature Plays does offer a wonderful opportunity to celebrate Signature's history of endorsing innovative new theatre. To that, I'll raise a glass...Happy anniversary!

Signature Plays includes The Sandbox written by Edward Albee, Drowning written by María Irene Fornés, and Funnyhouse of a Negro written by Adrienne Kennedy. It is directed by Lila Neugebauer. Set Design is by Mimi Lien. Costume Design is by Kaye Voyce. Lighting Design is by Mark Barton. Sound Design and Original Music is by Brandon Wolcott. Ariel Effects are by Paul Rubin. Production Stage Manager is Marisa Levy.