Book and Lyrics by Alfred Uhry; Music by Robert Waldman; Directed by Alex Timbers
Produced by the Roundabout Theatre Company 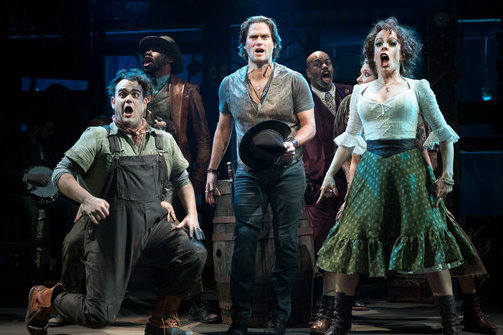 BOTTOM LINE: A light-hearted, spirited romp that could be perfect if not for some creepy and/or nutty plot elements.

Once upon time, The Robber Bridegroom was a hot, critically lauded original musical. In the mid-'70s, it originated off-Broadway, then came to the Great White Way in a limited run, until finally getting a commercial production. Along the way, its cast included up-and-coming talents such as Raul Julia, Kevin Kline, Patti LuPone, and Barry Bostwick, who won a Tony Award in 1976 for his work in the show. So if this show generated so much excitement back in the day, why is it not better known? One sees why in the current revival being mounted by the Roundabout: it’s sometimes hard to follow what the heck is going on. Happily, most of the time you can overlook that, because the music is so wonderful.

The Robber Bridegroom is adapted (freely) from a novella by Mississippi-born writer Eudora Welty, which is itself based on one of the Grimms’ fairy tales. The book and lyrics are credited to Alfred Uhry, who would later write the Pulitzer Prize-winning play Driving Miss Daisy and win a Tony for the book of the musical Parade. In Robber Bridegroom, he tells the story of 18th-century folk hero Jamie Lockhart (Steven Pasquale), an upstanding citizen by day and ruthless thief by night. Lockhart’s secret identity allows him access to the homes and valuables of rich folks who would never suspect him of being “The Bandit of the Woods.” When Rosamond (Ahna O’Reilly), a spoiled but spirited young woman who yearns for romance and adventure, wanders too far from home at night, the Bandit steals the clothes right off her back. Little does either of them know that Rosamond’s father Musgrove (Lance Roberts) has plans to marry her off to Lockhart. Interfering with these plans is Musgrove’s wife, Salome (Leslie Kritzer), the world’s sassiest evil stepmother, who schemes to get rid of Rosamond and seduce Lockhart herself. All of this is done with a wink to the audience, acknowledging that though these kinds of stories no longer make much sense to our modern world, we still delight in their telling.

Composer Robert Waldman’s score is an enchanting mix of Broadway style with folk and country idioms, and the cast—featured players as well as leads—handle the songs with gusto. Pasquale, as usual, both looks and sounds heavenly, and O’Reilly makes a charming comedic ingénue. The runaway star of this production, however, is Kritzer as the vain, greedy Salome: she leaves no opportunity for humor unexploited and sings like a rock star. Director Alex Timbers, acclaimed for his robust and inventive work on such shows as Peter and the Starcatcher and Bloody Bloody Andrew Jackson, sticks to his successful formula here, allowing his actors to make merry magic onstage with seemingly simple props and moving set pieces that evoke the roads and woods of pre-modern Mississippi.

Despite all of these successful elements, The Robber Bridegroom has some jarring problems, including its gender politics. It may seem churlish to complain that a story whose origins are in medieval Europe is sexist; however, when a wicked stepmom is depicted as selfish, shallow, and—worst of all!—hideously ugly, one’s feminist hackles may be raised. Additionally, the show has not one, but two songs that are, to put it bluntly, about rape—one of which is sung by our hero, Lockhart. This production has attempted to soften some of this material (for example, the Bandit no longer knocks Rosamond unconscious before taking her to bed), but enough of it remains to make an audience squirm more than a little. The other major problem with the plot is that at a certain point, it stops making sense. The show runs just 90 minutes, but what with all the hidden agendas, disguises, and secondary characters (including a foolhardy outlaw and—no joke—a talking disembodied head), it might have been worth it for Uhry to add length in the service of clarity.

Without the uncomfortable (and somewhat unnecessary) misogyny factor, The Robber Bridegroom would be all pleasure and no pain. Timbers and his solid cast are clearly having a ball, and when the show stays away from nasty stereotypes and sexual assault jokes, it’s irresistible. Maybe the next time it’s revived, its creative team will find a way to retain its mythic aspects and jettison the antiquated ones.

The Robber Bridegroom is by Alfred Uhry (Book and Lyrics) and Robert Waldman (Music). Directed by Alex Timbers. Choreography is by Connor Gallagher. Music Direction is by Justin Levine. Set Design is by Donyale Werle. Costume Design is by Emily Rebholz. Lighting Design is by Jake DeGroot and Jeff Croiter. Sound Design is by Darron L. West and Charles Coes.